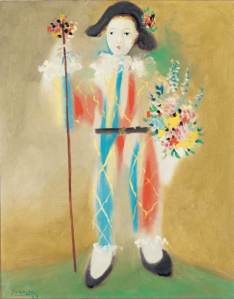 A portion of the impressive art collection of the art-dealing Nahmad family went on display at the Kunsthaus Zurich modern art museum over the weekend. The show, “Miro, Monet, Matisse – The Nahmad Collection” marks the first time that many of the works have seen the light of day since the works were first purchase.

The show is sure to attract art lovers as well as those who follow the market, since the Nahmad family is apparently very much a focus in the show. Reuters relates the following story from the Kunsthaus catalogue:

“On one occasion they drove through the night with a Picasso strapped to the roof of their Morris Minor car, because it wouldn’t fit in the trunk, Ezra’s son Helly said in an interview for the exhibition’s catalogue.

“‘When they arrived in Milan, they discovered to their shock that the painting was no longer there — it had blown off on the motorway. They drove straight back and luckily found the picture — lying damaged in grass on the roadside,” Helly said.”

It is great that they found it, though, as Mr. Nahmad confirmed in an interview for the show, they do own some 199 backup Picassos.