Last night as we approached Huffington Post’s Game Changers party at the Skylight Soho, we heard a commotion across the street. It seemed like Occupy Wall Street had made its way uptown…but why were they picketing Arianna Huffington? Were the restless legions of unpaid bloggers finally coming home to roost?

The protesters were shouting anti-Andrew Cuomo-isms. Now see, that was interesting. So far Governor Cuomo has remained a figure larger outside the debates of Occupy Wall Street, while Mayor Michael Bloomberg has taken the brunt of most of the protesters ire. But this event – which drew protesters who knew about the Governor’s appearance with his son, Mario… who might have even been alerted ahead of time by Arianna’s team for some big PR, as far as we knew – targeted either Cuomo’s desire to repeal the millionaire’s tax, or to get rid on the ban on FRACKing, an anti-Green hydraulic drilling into wells.

But despite the major star power and the presence of Kim Kardashian (who won the award for Business Game Changer for 2011, a whole other story), Huffington Post was still, well, The Huffington Post. Meaning that eventually, one the celebrities was going to dive into the crowd and switch sides. That person happened to be Feminist author Naomi Wolf.

Have you ever seen someone look so happy to get arrested? Famous people at Game Changers not detained for protesting (or telling the protesters that they don’t need a permit for a megaphone): Kyle MacLachlan, Cheryl Hines, Ms. Kardashian, Nora Ephron, and Gayle King. 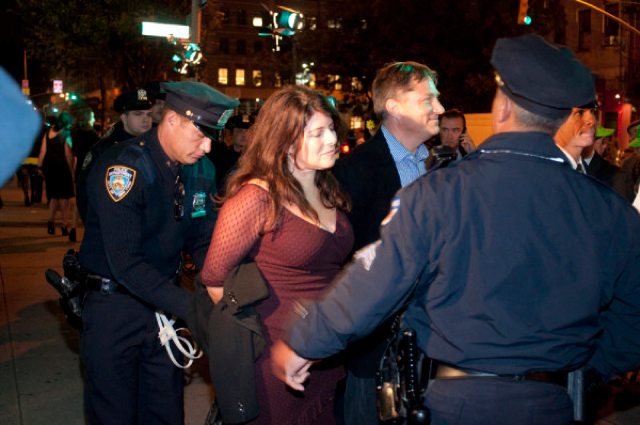