Wow, who knew that Mattel had so much sway over the way young girl’s think? Well, besides the fact that its best-selling Barbie doll sets young girls up for a lifetime of unrealistic beauty standards and causing bulimia, anorexia, and terrible peroxide treatments?

No, the real concern is that the latest Barbie is a “tokidoki doll”- created by Simone Legno, the man also behind a similarly-named Italian/Japanese fashion line – and that she is about to convince your kids that tattoos and trashy, vaguely-racist lifestyles are cool! Time for CBS to take this monstrosity to the streets to warn the parents!”

Tokidoki has bright pink hair, a dog named Bastardino, dresses like a BRAT doll’s “easy” older sister… but most importantly, she has tattoos. As the CBS video tells us, “According to the American Academy of Dermatology, one in four Americans aged 18-50 now has at least one tattoo.”

Of course, this number is sure to skyrocket once the 18-50 demographic — Why won’t someone think of the 30-year-old children! — check out this new cool Barbie and immediately decides to base their body image on that. (Just kidding, that would be as ridiculous as claiming that Barbie’s unachievable proportions are part of the reason so many young women grow up having such poor body image.)

Since tokidoki is a “collector” doll and can only be bought online, Mattel argues that she isn’t meant for a younger audience, but for those serious Barbie fiends out there, like real-life Waylon Smithers. This does nothing to alleviate New York parents’ fears that somehow they will accidentally buy their daughter (or son, NYC is very progressive) Tokidoki, which will install their offspring with terrible values, like misguided and semi-offensive ideas of Japanese culture permanent body ink. Then all their children will have to do is wait until they are 18 to start making themselves in the image of their favorite toy, which is definitely why 18-year-olds get tattoos in the first place. To be more like Barbie. 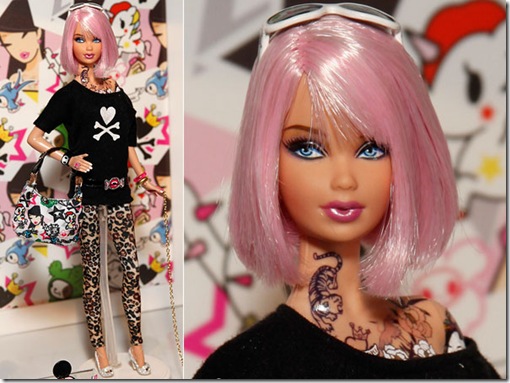