Governor Chris Christie announced this week that in 2013, there will be a Formula 1 Grand Prix race in New Jersey. The plan includes the cooperation of the mayors of Weehawken and West New York, two cities geographically involved in the circuit’s layout.

However Mayors Richard F. Turner of Weehawken and Felix Roque of West New York, both had the same concern, “How does New Jersey make money on this?”

“Tolls. And the sale of E-Z Pass  to Formula One Grand Prix top drivers, of course. We have already received E-Z Pass  applications from Ferrari’s Felipe Massa, and Mercedes GP star Michael Schumacher, as well as several other top drivers,” added Christie.

“E-Z Pass is a remarkable toll collection technology that makes race car driving more convenient, and will help Formula One drivers save money through discount plans offered by many toll facilities. It will reduce traffic congestion for everyone in the race,” noted New Jersey E-Z Pass Director Jorge Ramon Caceres.

Both Massa and Schumacher expressed concern that, “Having to stop every eight miles or so, and find change to pay a toll,” might impede their ability to be competitive.

“New Jersey remains a leader in hosting all types of national and international sporting events,” Governor Christie said, adding the Grand Prix of America to a list that includes last winter’s NCAA tournament and the Super Bowl in 2014. “While some pure race drivers will opt out of E-Z Pass , it is there for those drivers who wish to take advantage of the time savings it provides.”

World champion Sebastian Vettel, was equally impressed with the challenge of racing in New Jersey.

“It’s interesting, a good challenge,” said Vettel. “It’s very dusty to start with, but the track seems like it will be a new type of challenge…especially the toll lanes that give a lot of options to all the drivers. ‘Exact Change Only’. ‘E-Z Pass  lanes Only’. ‘Cash Only’. Toll-operators in case drivers need directions. We’ll see a good race in 2013.”

Placing a race in New Jersey, on a 10-year contract, “will be one of the best decisions you ever made.” Gov. Christie also said he is interested in bringing NASCAR to the track. 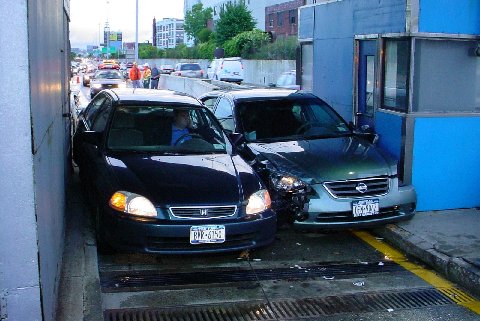