TRENTON – Asked whether he stood by the timing of an ultimately fruitless federal probe into U.S. Sen. Robert Menendez (D-NJ) in his capacity as U.S. Attorney, the governor wasted few words in his own support.

The recently-ended investigation was leaked to the press two months before Menendez’s 2006 re-election campaign against state Sen. Tom Kean Jr. (R-21), of Westfield. Gov. Chris Christie said at a press conference that he stands by that timing when asked by a reporter.

Critics have alleged since 2006 that Menendez was a political target of Christie’s federal law enforcement arm, in the same vein as former Department of Community Affairs Commissioner Joe Doria, who was also recently cleared of a federal probe that emerged as Christie was challenging Gov. Jon Corzine for the corner office.

Alongside the criticisms about Menendez’s investigation were national allegations of arm-twisting by the administration of President George W. Bush (for whom Christie was a major fundraiser) and then-U.S. Attorney General Alberto Gonzalez, based on an attorney dismissal list that Christie appeared on and then was removed from. Eleven federal officials resigned in the wake of the controversy.

Asked today whether the criticism about his handling of the dead-end Menendez investigation was appropriate, Christie replied in one word: “No.” 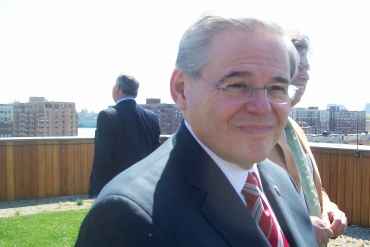