Ugh, women. Can’t they go five minutes without ruining a rally against corporate greed with their claims of inter-protest misogyny, objectification, and rape?

When filmmaker Steven Greenstreet created his Tumblr Hot Chicks of Occupy Wall Street in mid-October, he was attempting to show “the sexy side of protesting.” Unsurprisingly, his site was only up for a day before feminist blogs tore into the “creepy voyeur” for what they perceived as a sexist objectification of women – many of whom were photographed apparently without their knowledge or consent.

Mr. Greenstreet addressed these issues five days after his launch, in a October 15th post titled “Why?” His excuse was pretty flimsy, and his argument against detractors boiled down to “Any excuse is a good excuse to bring up the topic of women’s rights.” Not a lot of feminists bought the line, yet the site continues to grow in popularity. Because hey, who doesn’t like to look at attractive people?

But Mr. Greenstreet’s site is only part of the problem for women thinking of joining the Occupy movement. Three days later, a 19-year-old Cleveland woman claimed she was raped at the protests after “camp leaders” directed her to share a tent with a man named Leland. The OWS message boards erupted: the young woman was called a liar, accused of secretly working with the government to make OWS look bad, or at the very least she was asking for it by getting into a tent with a strange man, and other misogynistic excuses. Perhaps the only surprising aspect of the reaction to the alleged assault was that it was Occupiers themselves that were turning against the victim, who they perceived as a threat to their community and tentative relationship with the local authorities.

Of course, not all message board trolls speak for the majority of the OWS movement. Yet the “women issue” continues to be, well, an issue. Ashwini Hardikar wrote a blog post on October 13th titled The Value of a Safe Space: One WOC’s experience with harassment at Occupy Wall Street where she describes being hugged by a male protester, an act she considered intrusive and non-consensual:

“What the fuck do you think you’re doing? You can’t just touch people without their permission. It’s not ok to be in someone’s personal space if you haven’t gotten their consent. I have no idea who you are, you can’t just touch me!” I was yelling, getting louder and louder. I wondered if anyone was listening.

“I was just giving you a hug. I’m not allowed to give people hugs?”

I couldn’t believe he was arguing with me. My heart was racing. All those other times that I had been harassed or groped, and it happened so quickly by a faceless assailant, or when I just felt paralyzed, flashed through my mind. All those times that I didn’t feel like I had a voice. This time, I had found mine somehow.

“No, you are not allowed to touch people if they haven’t asked you to. You’re giving this movement a bad name right now because you are going around and violating others’ space, and it makes people feel unsafe.” My voice sounded clear and very strong, even though I was shaking. Wow, I thought to myself, I know exactly what to say for once!

While some may dismiss Ms. Hardikar’s reaction to the gesture as extreme, she speaks to a growing community of women who agree with OWS’ message, but who worry that their basic human rights might be getting lost in the shuffle. For that reason, Ms. Hardikar created a Safer Spaces Working Group in the General Assembly. It is described in one sentence: “Working for respect of women, LGBTQ, & POC, Rape victim advocates, queers encouraged to come!” They have created their own female-only sleeping space in a section of Zuccotti Park.

Sarah Seltzer‘s article for The Nation serves as an antidote to those offended by Mr. Greenstreet’s objectifying blog. Her Wednesday post, titled “Where Are the Women at Occupy Wall Street? Everywhere—and They’re Not Going Away” described Ms. Hardikar’s experience, as well as those of other strong women who continue to protest even when they feel their voices aren’t heard as loudly as their male counterparts.

Ms. Seltzer’s article quotes a female activist who goes by Ketchup, who has been on the ground at Zuccotti since day one, and whose attention, it’s noted, has shifted toward helping create these safe spaces. Yet Ketchup remains optimistic in the face of intra-group misogyny:

“I would just say if you are a woman, please come here! Understand that while there will be misogynists in any group, people with bias in any group, the process here exists here to check that and there is ample support to deal with that.”

Some have argued that women like Ketchup and Ms. Hardikar are detracting from OWS’ message to talk about “women issues.” But we wouldn’t be too worried: as OWS keeps reminding us, they never had a cohesive message to begin with…let alone one that is about to be derailed by women demanding their right to walk freely and Occupy unmolested. 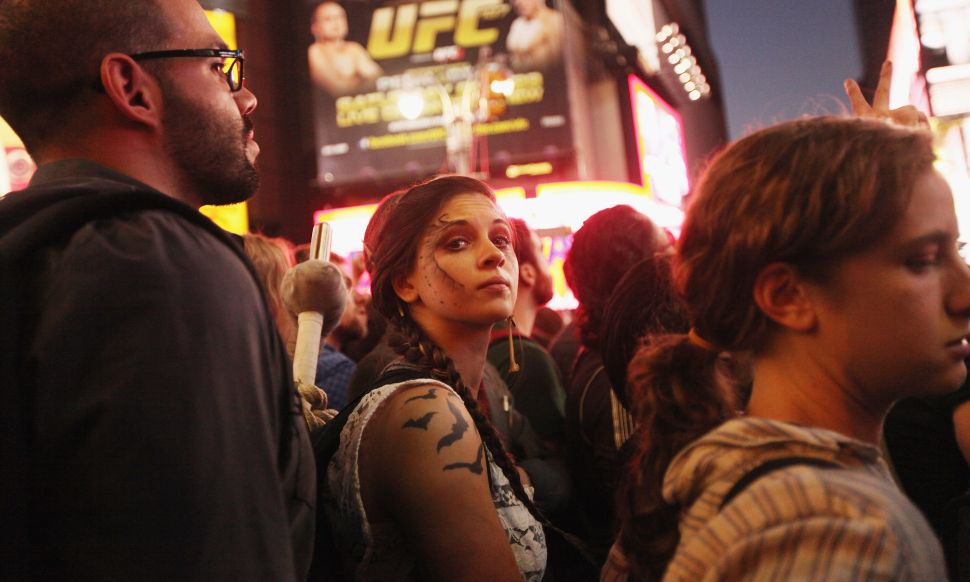