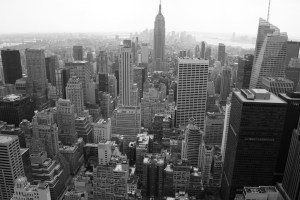 Raise high your palette knives! Wave your unstretched canvas! Occupy Wall Street has hit the art world. In recent weeks, protestors have disrupted Sotheby’s auctions in solidarity with union art handlers who have been on strike for more than two months, read manifestos outside of art museums and temporarily occupied Artists Space, a nonprofit gallery in Soho. If you haven’t been following the minute-to-minute developments on Gallerist, here’s a recap of the Occupy actions.

In the second in a string of interventions at the Upper East Side auction house, a young man in a button-up shirt and tie leapt from his seat during an afternoon sale and shouted, “Occupy Wall Street supports the 99 percent!” A group of security guards circled him and walked him out of the room. “Sotheby’s locks out their workers!” he continued on his way out. “Shame! Shame on the 1 percent!” More disruptions with yelling and an air horn followed as, one by one, the interlopers were removed. With buyer’s premiums, the auction netted $3.6 million.

Earlier in the month, the Sotheby’s art handlers union protested outside of 820 Fifth Avenue, targeting the wealthy auction-house clients living inside the tony residence. Collector Lily Safra sent down sandwiches to the protestors. “It’s good that Lily Safra did this,” union president Jason Ide told us. “It sends a message to prominent New Yorkers.” In what some may describe as an awkward occurrence, on Thursday, Oct. 20, Ms. Safra and her husband, Edmond, sold off hundreds of their belongings at Sotheby’s in a sale that totaled $45.9 million.

Artist Noah Fischer, 34, is a Columbia M.F.A. grad, exhibitor at Chelsea’s Claire Oliver gallery and early supporter of Occupy Wall Street. Mr. Fischer took the subway around town with a band of about a dozen protestors, reading a manifesto outside of the Museum of Modern Art and the New Museum. He wore a mask on his face that looked like a giant quarter.

“We, the artists of the 99 percent, have emerged!” Mr. Fischer cried outside MoMA. “Not as pawns in your fraudulent art market where the royalty of Wall Street rule. And launder their stolen loot! But rather with our own voices, and power.” New York magazine art critic Jerry Saltz showed up, and preached to the crowd, “Speaking is a force!”

The day before the event, Mr. Fischer told us the impetus for his quixotic campaign: “With Occupy Museums,” he said, “we are encouraging people to think about who museums serve, and calling the art world out on its elitism and its abuse of labor.” Mr. Fischer has also been involved with the group of artists who created a website called the Wall Street Occupennial, which aims to document the various interventions taking place around town.

Oct. 22
The Occupation of Artists Space

But the most outré act so far may be the work of the group of about 10 people—including the artist Georgia Sagri, who, like Mr. Fischer, is a Columbia M.F.A. grad—who occupied the nonprofit Soho gallery Artists Space on the afternoon of Saturday, Oct. 22. They refused to speak to press, but when we showed up on Sunday afternoon, there were about a dozen people there, including two homeless people.

Members of the group spent the night there. They conversed with Artists Space staff, but, like the O.W.S. protesters, made no demands. They did, however, make a blog, on which they explained their position: “Refusing to allow the growing global occupation movement to be reduced to mere symbolic exhibitionism or panel-talk, the participants of this new space are not hosted by paternalistic aesthetic discourse.”

“I don’t mind the gesture, but I’m surprised by the naïveté,” Artists Space executive director and chief curator Stefan Kalmár said as he sat at a desk across the room from the occupiers, looking exasperated. “I feel like our work [at Artists Space] is far more progressive than what I have heard here.”