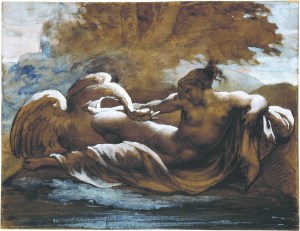 An exhibition of drawings by French 18th and 19th century masters at the Pierpont Morgan Library, in midtown, might seem like an odd place at which to reflect on the Occupy Wall Street protests down at Zuccoti Park. But it’s not. These happen to be intensely political images, intimate records of revolutions past that look forward to the uprisings of our own time.

The Morgan, rarefied home to incunabula and bound books, and former private library to the banker J.P. Morgan, lent the Louvre ten dozen French drawings in 1993; the current exhibition of Louvre loans reciprocates that favor. If you’ve been to Paris, you know the paintings that some of these 80 drawings presaged: iconic works like Jacques-Louis David’s The Intervention of the Sabine Women, Jean-Auguste-Dominique Ingres’s Grand Odalisque, and Eugène Delacroix’s Liberty Leading the People.

In the 1830 graphite study for this last painting, Delacroix’s Liberty is a young, bare-breasted woman, somewhere between sinuous goddess and sexy protester. She’s the kind of revolutionary who looks so good getting arrested on the Brooklyn Bridge, that hundreds of people turn up the next day, a third of them out of admiration for her politics, and the other two-thirds because they’re trying to pick her up. If you think such radical charms are purely historical, consider as evidence the numerous recent articles on the best-looking Occupy Wall Street protesters in this and other publications.

On the theme of arrest, the artist Jacques-Louis David, locked up in Quatre Nations prison for his political activities, passed his time by drawing fellow inmates. Images like Portrait of a Man, Half-Length and in Profile to the Right, a pen and ink wash, show the typical neoclassical figure as rumpled, rugged and undefeated, but in need of a good wig and a shave. David would live to become Napoleon’s court artist for the next two decades, capturing with journalistic precision, in the sketch The Emperor Napoleon I Crowning Himself, the Pope Seated Behind Him, the gesture that forever reordered the hierarchy of church and state.

In short, these are deeply political images. During the late 18th and much of the 19th century, France was perpetually in political turmoil. The country went from being a Monarchy to a Republic, to a Directory, a Consulate, an Empire, a Monarchy again, another Empire, another Monarchy, a Constitutional Monarchy, and what were referred to as the second and third Republics. The country reordered its currency, its street names, and even the days of the week, and visual art both reflected and actively shaped these changes.

Allegories abound: Greeks emerging from the Trojan horse (by Girodet). The Death of Cato of Utica (by Guérin). There are many scenes, like the gruesome Marius Entering Rome by Gérard, depicting the bloody reality of war, heads on pikes, exhausted victors stumbling on, and betraying the age’s worries about the toll of ongoing violence.