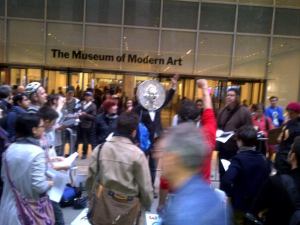 A man wearing a homemade mask made to look like a quarter was standing in Zuccotti Park amongst the Occupy Wall Street protesters yesterday as the sun was starting to sink behind the skyscrapers. He had a cardboard placard that said: OCCUPY MUSEUMS.

A man walked by and said, “Nice Halloween costume.”

“Halloween is coming up!” He replied. “And I’ve been here since September 18!”

He removed his mask to reveal a tired, young, bearded face. This was Noah Fischer, the young artist that organized Occupy Museums. He rang a bell to call a meeting. About 20 people gathered around.

“Today is a historic day of the occupation of museums in 2011,” he told them. “Can everybody hear me? On the boards of these museums are the same people on Wall Street playing games with our money. The art market is like a pyramid scheme! At the top of the pyramids are museums!”

He said the day was a “consciousness exercise.” He did not want to rip down any Pollocks. They would occupy the space outside the entrance of MoMA. Maybe they would go to the Frick. Probably they would go The New Museum. They went over the so-called mic check, in which one person shouts a short phrase and the group repeats it. They went over hand signals. Wiggling fingers upward means you like what someone is saying. Wiggling them downward means you don’t like it. Wiggling them horizontally means so-so.

“In addition, we should probably occupy the subway together!” Mr. Fischer shouted and everyone repeated the line (they were practicing). “We are gonna leave for MoMA in about two minutes! Does anybody know exactly how to get to MoMA from here?”

A man sheepishly raised his hand. The group took to the sidewalk. They entered the 4 train subway station going downtown and tripped up on the staircase.

“We gotta cross the street!” one of them shouted. They crossed Broadway in front of a double decker tourist bus. The group was smaller now, about ten people. They all had Metrocards. There was some debate about where to transfer to the local line as the train pulled into the station.

“Should we chant?” Mr. Fischer said.

They decided against chanting. They passed out some pamphlets among the frowning faces on the 4 train.

Getting out of the subway, Mr. Fischer put on the mask again. The group formed a straight line and walked in silence for a while. As they crossed Park Avenue, a young woman began chanting: “Occupy MoMA!” clap, clap, clap, clap, clap. A few voices joined in, all out of sync.

“Where is MoMA?” the woman who started the chant said in the same rhythm.

They stopped in front of the Rolex store.

“Let’s get together as we walk to MoMA,” Mr. Fischer said. “This is our power: our voices.”

They began chanting, “We are the 99%!” It was 5:00 when they arrived at the front entrance of MoMA on 53rd street. They gathered in a big circle.

They went over the hand motions again. A cop came and pushed them to the edge of the sidewalk and put up barricades.

More people started to gather and they began to read their manifesto in unison, a fairly long document that takes up both sides of a double sided page.

“We, the artists of the 99% have emerged! Not as pawns in your fraudulent art market where the royalty of Wall Street rule. And launder their stolen loot! But rather with our own voices, and power.”

When they were finished, they opened up the floor for people to say what was on their minds. The group continued to repeat everything that was said. The artist Loren Munk was there, a naysayer trying to talk over everybody. One man began speaking about what he called an “exhibition that changed the world” at MoMA in 1995, a large retrospective of American art.

“Jerry Saltz asked Glenn Lowry,” the man said and the group repeated it, “To do another 50-year retrospective.” He paused again so the group could repeat. “And he called it dog food!”

As if being called upon, Mr. Saltz materialized, standing on a barricade and snapping a picture of the group with his phone.

“They were talking about me?” he asked with a smile. “I missed it.”

He began chanting with the group. During a silence, he started his own chant.

“Speaking is a force!” he said and everybody repeated it.

Just then the group was pushed farther off the sidewalk. The gate was coming down on the front entrance of MoMA. The museum closes at 5:30 on Thursdays. They would leave shortly. They decided not to go to the Frick after all. Three museums would be a lot for one day.