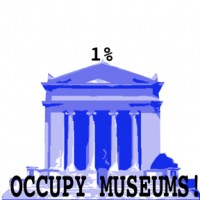 The Occupy Wall Street protests, which just entered their second month, have spilled over into the art world in recent weeks. Protests have been held at Sotheby’s, and now a group calling itself Occupy Museums announced today that it will assemble at Zuccotti Park, the headquarters of the protests, on Thursday, Oct. 20, at 3 p.m., and then travel to the Museum of Modern Art and the Frick Collection, reading a manifesto at each stop along the way.

“We’re at a moment where the one percent controls the government and the culture,” Mr. Fischer, 34, who has been involved in organizing Occupy Museums, told Gallerist over the telephone. “With Occupy Museums, we are encouraging people to think about who museums serve, and calling the art world out on its elitism and its abuse of labor. The conversation is very, very important here.”

Disclosure: this writer took a drawing class as an undergraduate with Mr. Fischer in 2006, though we have not been in contact since then.

A text from Occupy Museums has been posted on blogger Paddy Johnson’s Tumblr account. It begins as follows:

“The game is up: we see through the pyramid schemes of the temples of cultural elitism controlled by the 1%. No longer will we, the artists of the 99%, allow ourselves to be tricked into accepting a corrupt hierarchical system based on false scarcity and propaganda concerning absurd elevation of one individual genius over another human being for the monetary gain of the elitest of elite.”

The group does not plan to occupy the museum beyond its regular visiting hours, according to Mr. Fischer. “This is about making a statement about democracy, to let the museums know we’re here,” Mr. Fischer explained. “We’ll see if that happens another time.”

Mr. Fischer, who attended Columbia’s MFA program, said that he has been involved in the Occupy Wall Street protests since they started a little over a month ago, and is a member of the arts and culture committee, which has been organizing actions related to the protests.

Gallerist asked how the group picked its targets. “MoMA has long been associated with the elitist of the elite of the art establishment,” Mr. Fischer said. “That doesn’t mean it’s a bad place, and it doesn’t mean that the art there isn’t good, but it shouldn’t be charging $25 to get in.”

“We are conditioned to accept all kinds of hierarchies and worship money,” Mr. Fischer said. “A lot of what is going on in Occupy Wall Street is that we are creating a space to unlearn those kinds of things.”