"Don't tread on me," Occupy Wall Street has no plans of vacating for city clean-up

After being told that they would have to “temporarily” vacate Zuccotti Park for sanitation reasons by Mayor Bloomberg, Occupy Wall Street responded to what one member is calling “an eviction notice.”

According to one of OWS’ Media team, a young man named Luke, there is “no way” that the protesters can comply with all the outlines set in Brookfield’s letter to the city, since OWS has been expressly forbidden from emptying the parks trash receptacles themselves; that the “cleaning” would include the removal of all tarps and sleeping bags, which the residents have been using to spend the night in the parks.
Brookfield’s Letter to NYPD asking to “clear” Zuccotti Park of Occupy Wall Street protesters

In reaction, Occupy Wall Street has planned to clean the park up in their own, which they announced on Twitter: Much like Bloomberg’s plan, Luke told us by phone that members of OWS will be cleaning up the park in phases. They will also be going down to Wall Street, to clean up “where the real mess is,” referring (obviously) not to the protesters’ own leavings. The fear is that if all the protesters vacate en mass, they will not be allowed back into the park once it is “cleaned.”

“We will redouble our efforts to clean up the park, but what is outlined in (Brookfield’s) memo is tantamount to banning us from the park,” Luke said.

Currently OWS is asking for donations of brooms, mops, buckets, etc., all to be shipped to their Zuccotti Park location, which one could argue is part of the problem that Brookfield has with the protesters occupation.

As for how Mayor Bloomberg reacted when meeting the protesters last night, Luke said that he only saw him from afar, but “knows that he was treated respectfully…if not warmly.”

Update: This email call to arms has just been sent out by members of Occupy Wall Street.

Tell Bloomberg: Don’t Foreclose the Occupation.
Join us at 6AM FRIDAY for non-violent eviction defense.

Please take a minute to read this, and please take action and spread
the word far and wide.

Occupy Wall Street is gaining momentum, with occupation actions now
happening in cities across the country.

But last night Mayor Bloomberg and the NYPD notified Occupy Wall
Street participants about plans to “clean the park”—the site of the
Wall Street protests—tomorrow starting at 7am. “Cleaning” was used as
a pretext to shut down “Bloombergville” a few months back, and to shut
down peaceful occupations elsewhere.

Bloomberg says that the park will be open for public usage following
the cleaning, but with a notable caveat: Occupy Wall Street
participants must follow the “rules”. These rules include, “no tarps
or sleeping bags” and “no lying down.”

So, seems likely that this is their attempt to shut down #OWS for good.
PLEASE TAKE ACTION:

1) Call 311 and tell Bloomberg to support our right to assemble and to
not interfere with #OWS. If you are calling from outside NY use this
number 212-NEW-YORK.

2) Come to #OWS on FRIDAY AT 6AM to defend the occupation from eviction.

Occupy Wall Street is committed to keeping the park clean and safe —
we even have a Sanitation Working Group whose purpose this is. We are
organizing major cleaning operations today and will do so regularly.

If Bloomberg truly cares about sanitation here he should support the
installation of portopans and dumpsters. #OWS allies have been working
to secure these things to support our efforts.

We know where the real dirt is: on Wall Street. Billionaire Bloomberg
is beholden to bankers.
We won’t allow Bloomberg and the NYPD to foreclose our occupation.
This is an occupation, not a permitted picnic. 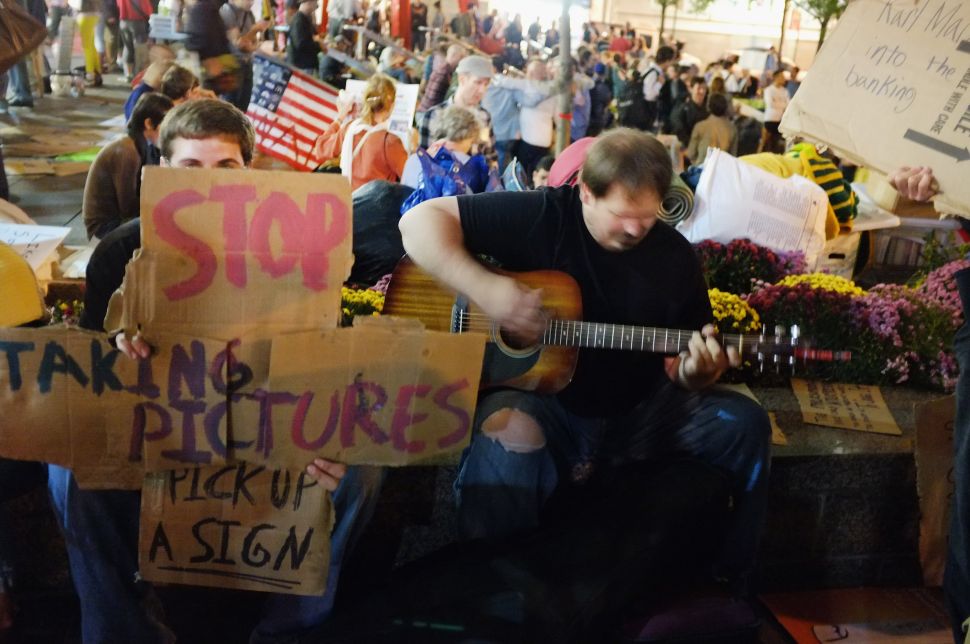