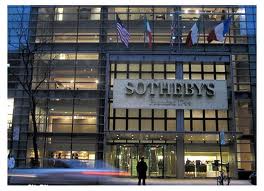 In the lobby of Sotheby’s—where you can see the large inflatable rat out front of the building where the locked out art handlers had set up their picket line—the women at the front desk were checking IDs. A line had formed of people trying to get to the seventh floor for the Impressionist and modern art auction. A woman was asking why she had to sign in and hand over her driver’s license. This kind of thing doesn’t usually happen at Sotheby’s.

“There was an,” the woman at the desk paused, “incident. A few weeks ago. We’re just trying to make sure this is a pleasurable experience for everybody.”

The “incident” occurred on September 22, when Occupy Wall Street protesters disrupted a public auction at Sotheby’s Upper East Side location out of solidarity for the art handlers, who have yet to reach an agreement in their contract negotiations with the auction house. Tuesday afternoon, there was a repeat performance.

People were suspicious from the outset. There were security guards lining every side of the room. A few elderly women were talking about the increased security.

“They were IDing because of The Wall Street,” one of them said.

“I was here at the last auction. They were activists. Young activists. They kept standing up. It was so scary. They couldn’t get them.”

About 30 minutes into the auction, a young man with a button-up shirt and tie stood and shouted, “Occupy Wall Street supports the 99 percent!” A group of security guards circled him and walked him out of the room. “Sotheby’s locks out their workers!” he continued on his way out. “Shame! Shame on the one percent!”

“And we’re still on lot 29,” the auctioneer said quickly as the man left the room.

People went about their business, but the security guards became increasingly suspicious of the young people in attendance; they stood in the aisles close to them and watched carefully. But as lot 42, Tsuguharu Foujita’s Okinawan Burial Caves, came up on the block, a very old man, bald on top with long hair in the back and wearing all denim, blew a air horn.

The disruptions continued. The crowd grew more and more restless with each blow of the air horn. Some of them got up and left.

“It’s so annoying,” a young woman behind us said.

For most of the auction a young man with a rat-tail haircut, tight jeans and a white t-shirt sat in the middle of the room, reading The Financial Times. He occasionally picked at his ears and coughed into his hand. It was when the price of lot 76, Monet’s Les Nymphéas, had climbed up almost three times past its high estimate of $30,000 that the young man stood silently and pulled out a air horn. He let it blow once, loudly.