Included in the arrests tonight following the Occupy Wall Street’s Megamarch was the self-identified OWS “media team.” Uploaded 17 minutes ago from a YouTube account named OCCUPYWORLD, the video shows several young men in the back of a squad car, one of whom apparently remained un-cuffed.

It is unclear if all the men were even part of the protest. One of the men is outfitted in a nice suit and not looking like much of a threat to anyone. He recounts how, despite not resisting arrest, “three or for (policemen) threw me violently to the ground, my glasses nearly broke in half.  They threw a baton on my back, as hard as they fucking could. I was on the sidewalk…I was just in the financial district.” He is then told to “Shut the fuck up,” as to apparently not raise police suspicions that a video was being taken in the back of a paddy wagon.

If you have any more information about these young men, please contact us at dgrant@observer.com

Update: After calling the number that briefly flashes across the screen, we got a hold of Sam Cohen, the attorney for the law office of Wylie M. Steckhow whom we previously profiled at OWS. He said he was unable to give out any information or names of those arrested. At the very least, we know these kids have a lawyer. 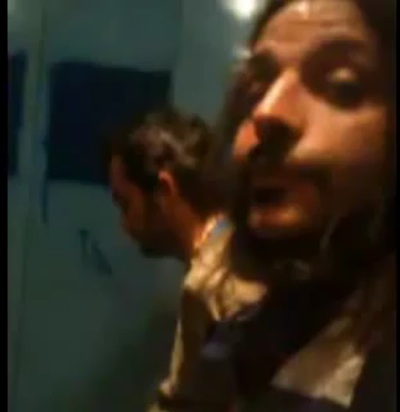