This must be the district attorney’s worst nightmare: since September 17th, there have been 800 people arrested and charged in conjunction with the Occupy Wall Street protests. The majority of these arrests come from the mass Brooklyn Bridge confrontation on October 1st, when over 750 individuals (including reporters) were charged with disorderly conduct. But there are also the equally controversial and high-profile Citibank arrests, where plainclothes cops barred the door to prevent anyone from leaving the premises, and in at least one instance dragged a woman back into the bank to arrest her for criminal trespassing and resisting arrest.

These protesters have lawyered up, thanks to a handful of civil rights attorneys and The National Lawyer’s Guild, and those lawyers are threatening to clog up the Second District Circuit until all charges are dropped. Some of those arrested are launching counter lawsuits. Oh yes, this will be a shitshow.

While most of the protesters have been let out and issued summons for minor violations, they will still need to answer before a judge. To make things easier on the whole judicial process (and responding to defense attorneys” threats), prosecutes from Manhattan District Attorney Cy Vance Jr.’s office offered 340 protesters –about half of those arrested on September 24th and October 1st — “adjournments in contemplation of dismissal.” They would only continue charges against the protesters who received DATs (desk appearance tickets), and not those who were just issued summoned. This means DAT charges would be dropped completely as long as the defendants don’t get themselves arrested again in the next six months.

This offer came in yesterday, in an attempt to avoid the tidal wave of bad P.R. that would surely descend on the D.A.’s office if 800 kids were dragged into court with their (metaphorical) guns ablazin’, giving interviews to the press about the NYPD’s questionable behavior, and what have you.

Unfortunately, the lawyers for OWS aren’t playing: they say that their clients would rather have their day in court than take a plea that might prohibit them from participating in any more protests.

One defense lawyer working on the case, Martin Stolar, told The Daily News that it was “totally arbitrary” who got a summons and who got a DAT (desk appearance ticket).

“These are people who are activists; they put themselves in motion with their feet and marched,” Stolar was quoted as saying in BusinessWeek. “They’re more principled than a random 700 people that you would single out.”

Rebecca Heinegg, a lawyer for the guild, represents 15 defendants involved in OWS protests, including those arrested during the Citibank incident on October 15th. She said that her clients would also be demanding a trial, despite the fact that 11 of the other protesters arrested that day had already agreed to a deal in which they would plead guilty to disorderly conduct; a reduced charge from criminal trespassing.

“As I understand it a bank employee locked the bank from the inside and prevented them from leaving. Police showed up and arrested them for not leaving,” Heinegg said.

When reached for a statement regarding the deal set forth, Erin Duggan, a spokeswoman for the D.A.’s office, told The New York Observer, “We have not commented on this.” Yesterday she told Bloomberg News, “Every arrest that comes into the DA’s office is assessed individually, and charging decisions are based on the evidence and circumstances unique to each case and defendant.” 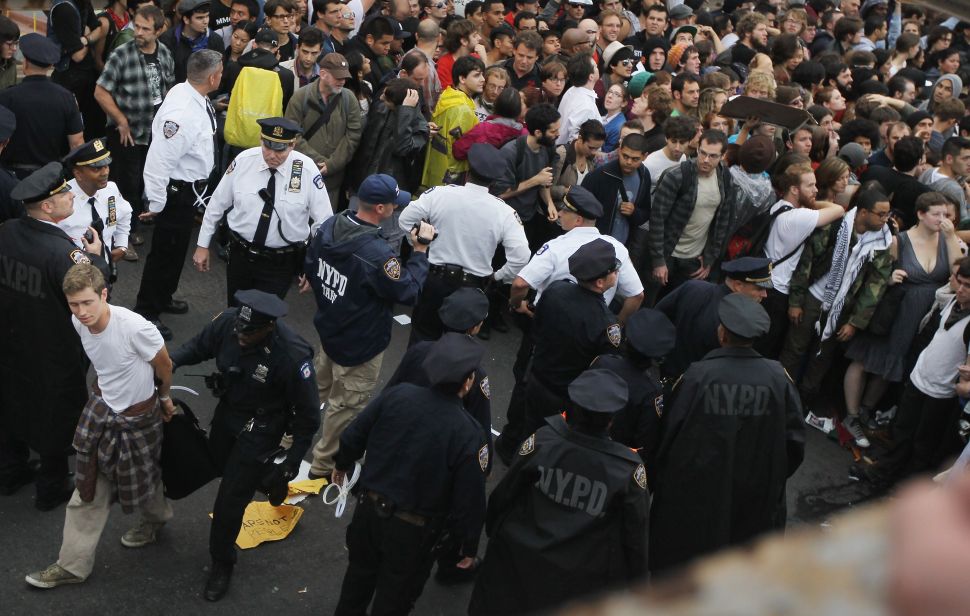