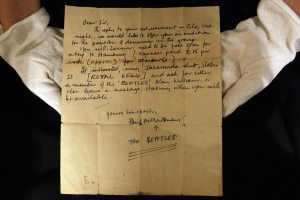 Below, the text of a letter written by Paul McCartney to an unidentified drummer asking him to audition for his band:

In reply to your advertisement in Echo, Wed. night, we would like to offer you an audition for the position of drummer in the group. You will, however, need to be free soon for a trip to Hamburg (expenses paid £18 per week (approx.) for 2 months).

If interested, ring Jacaranda club, Slater St. [ROYAL 6544] and ask for either a member of the ‘BEATLES,’ Alan Williams, or else leave a message stating when you will be available.

Yours sincerely,
Paul McCartney of THE BEATLES

According to the Associated Press, the letter will be auctioned next month by Christie’s. It is estimated at around $11,000-$14,000. The letter was discovered folded up in a book at a yard sale in Liverpool. The Beatles eventually chose Pete Best “because he had a drum kit” (they fired him not long after that). You probably should have responded to that letter, unknown drummer.