All is fair in love and Mace

You thought pepper spray was a force used only for controlling masses of the unwashed 99%? Think again: on Occupy Wall Street it’s also a deus ex machina, as well as cupid’s arrow. A really, really painful arrow applied directly to one’s eyes and that can cause permanent oracular damage.

Deputy Inspector Anthony Bologna, whom we all remember as being the first NYPD officer identified as using his spray as a weapon against unarmed protesters in September, almost got away with just a slap on the wrist from his department. With only 10 vacation days docked due for his behavior, both Officer Bologna and the women he allegedly used excessive force against were pissed. But now there’s a second repercussion Officer Bologna was been transferred out of his department to Staten Island, where the 30-year-old veteran currently resides. And since there has yet to be an Occupy Staten movement, we’re sure both the protesters and Officer Bologna, who actually lives in the borough, will be much happier.

Then there’s the curious case of Kaylee Dedrick, a victim of the NYPD’s Mace-iest cop, who still plans on pressing charges for misdemeanor assault. Robert Grodt, another activist from Santa Cruz who was at the scene of the September 24th incident, managed to drag Ms. Dedrick after she had fallen to the ground into a nearby movie theater, where he treated her eyes in the darkness of utility closet. Now the two are an item, and the tale of the “pepper spray couple” stands as a testament to both the power of love and chemical agent. 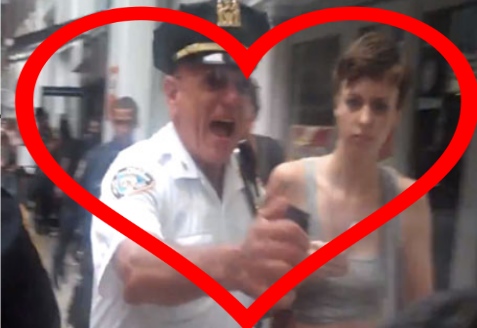