Last March, we did a socialite-laden post about the dangers of accidentally CC’ing everyone on an invite list instead of using BCC. In most circumstances, you chalk the mistake up to a faux-pas and feel a momentary twinge of embarrassment. Of course, if you are a photographer to the stars, this might lead to more sticky situations.

Liam McMullan, son of famed photog Patrick and quite a shutterbug himself, invited us to his father’s PMC Magazine/Maybeline party last night at the Dream Hotel in Chelsea. Unfortunately the rain combined with our stupid decision to wear leather flats to work, we were unable to make it. The moment we were about to reply to the Jr. McMullan’s email (sent from his smartphone), we realized that he had sent the invite out to over 30 people en masse (message).

Glad we dodged a bullet and didn’t press ‘Reply All’! As we were congratulating ourselves on our Internet social skills, we noticed that some of the names of the list were definitely not for media eyes. Like say, James Franco‘s Gmail account. Or Andrew W.K.‘s. Or Russell Simmons‘s personal email.

While we’d never be so gauche as to actually put these people’s private information out there, as a public service to celebs and socialites, here’s a list of people who might be wanting to change over to Hotmail pretty soon:

Actually, strike what we said before: It’s actually amazing how many of these cool kids have kept a hotmail/yahoo address. Or maybe that’s just their “PR” address they give out in case a snafu like this ever occurs. 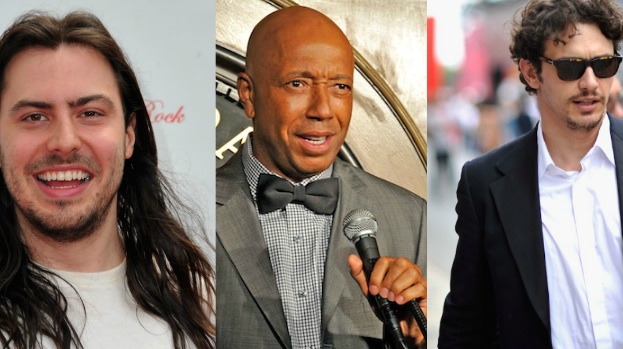