Update 7:24pm: Reuters has reverted the post back to its original story (Who’s behind the Wall Street protests?), and added a different URL to host the updated one (Soros: not a funder of Wall Street protests). So it looks like they’re running both pieces with no indication that the other one exists. Reuters Social Media Editor Anthony DeRosa said on Twitter that there was a “note added at bottom with link to original story, which should have been done in the first place” but we don’t see it at this URL. Or the other one. Got it? Yeah, we’re confused, too.

Reuters caused a bit of a stir today when they published a story connecting George Soros to Occupy Wall Street. This did not go over well, because the connection was tenuous at best, and at its worst, patently questionable.

These are both at the same URL, with no correction or note appended at the bottom. Anti-Wall Street protesters say the rich are getting richer while average Americans suffer, but the group that started it all may have benefited indirectly from the largesse of one of the world’s richest men.

George Soros isn’t a financial backer of the Wall Street protests, despite speculation by critics including radio host Rush Limbaugh that the billionaire investor has helped fuel the anti-capitalist movement.

“I can understand their sentiment,” Soros told reporters last week at the United Nations about the Occupy Wall Street demonstrations, which are expected to spur solidarity marches globally on Saturday.

Soros spokesman Michael Vachon said that Soros has not “funded the protests directly or indirectly.” He added: “Assertions to the contrary are an attempt by those who oppose the protesters to cast doubt on the authenticity of the movement.”

And so on. The entire thing is utterly baffling, as Reuters seems to be answering a question nobody but their reporters—who don’t fall under their labeling of “critics”—were asking.

Reuters finance blogger Felix Salmon has already weighed in on the mess, noting that “Reuters cannot — must not — get a reputation as a right-wing media outlet.” #ReutersScoops has already become a mediapolitick Twitter comedy meme.

The new version—located at the same URL as the original version, with portions of the original’s text intact—is right here. But because the magic of Google Cache eventually goes away, we’ve screengrabbed the entire original story, right here: 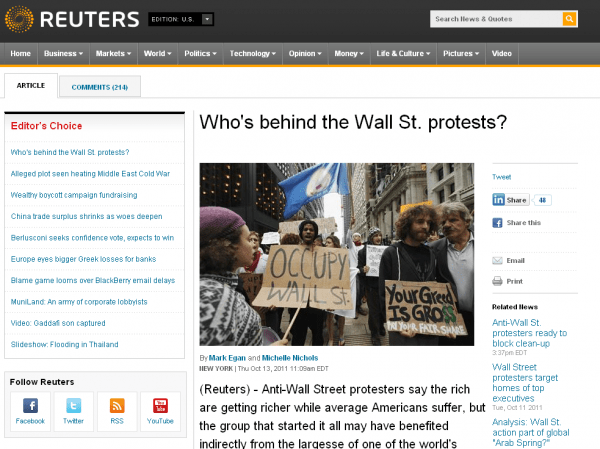