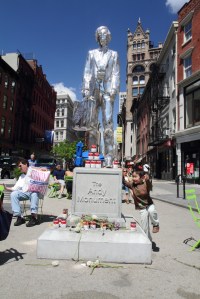 Last Friday marked the 125th anniversary of the opening of the Statue of Liberty.

By a remarkable coincidence, the Public Art Fund announced this past weekend that artist Rob Pruitt’s chrome statue of Andy Warhol, a symbol of hope and freedom in its own right, which had been scheduled to end its six-month residency at the northwest corner of Union Square park this month, will remain there until May 13, 2012.

“The public has embraced Andy, and we’re delighted to extend his stay in Union Square,” Public Art Fund director and chief curator Nicholas Baume said in a statement included in the announcement, which noted the frequent presence of Campbell’s soup cans, flowers and various Warhol-related detritus around the base of the statue, The Andy Monument.

Mr. Pruitt noted in his own comments that the Pop artist served as something of a beacon for him. “I’ve really loved Andy Warhol since I was a kid, and I came to New York with the idea of pursuing a sort of Warholian life,” he said.

It would seem that Mr. Pruitt had a great week, having also appeared as a guest judge on Bravo’s Work of Art on Wednesday. Let’s end with the closing line from the review that WoA cast member and New York magazine critic Jerry Saltz published on the Warhol sculpture back in March, a suggestion that we wholeheartedly endorse: “It should be left here forever.”