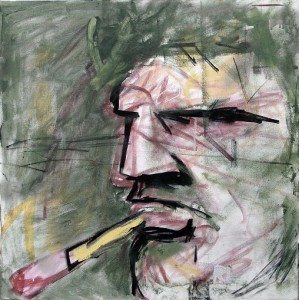 Robert Loughlin, a painter and design expert who was a leading source of Modernist pieces throughout the 1980s and ’90s in New York, died on Sept. 27 at the age of 62. The cause of death was being hit by a car while crossing a road near his home in North Bergen, N.J.

Mr. Loughlin was crossing the road because he had been feeding stray kittens that resided across the street, according to his longtime partner Gary Carlson, The Hudson Reporter reports.

The New York Times has this to say about the design maven:

“Equal parts artist, art historian, scavenger and horse-trader, Mr. Loughlin schooled a generation of collectors in the high quality of half-forgotten Modern and midcentury designers — not by writing or lecturing about them, but by scouring flea markets and thrift stores for discarded pieces of their work, and selling them.”

The Times goes onto quote Vincent Fremont, a Warhol associate and founding director of the Andy Warhol Foundation: “Andy bought so many chairs from him… his nickname for Robert was the Chairman.” Basquiat and Mapplethorpe were also customers of Mr. Loughlin, who for a time ran a gallery in the East Village. “Mapplethorpe loved him,” Mr. Carlson told The Wall Street Journal. “He’d grab him and take him into his darkroom all the time and leave me standing out there.”

Mr. Loughlin’s most famous discovery was finding a Salvador Dalí portrait in a Salvation Army store in downtown Manhattan. After purchasing it for $40, he sold it at auction for $78,000.

Mr. Loughlin also painted throughout much of his adult life, often depicting a burly character that he titled “The Brute,” based on Mr. Carlson, whom he met at a gay bar in Manhattan called Boots and Saddles in the 1980s.

“The night before his death, they had visited Soho, where Loughlin posed for photos next to work by his favorite artist, Man Ray, in a dealer’s home. They also visited Moss, who Loughlin had always emulated and who Carlson called ‘the Mount Everest of design.'”