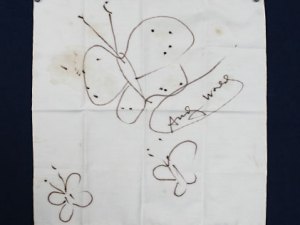 Ryan O’Neal has filed a cross complaint against the board of regents of the University of Texas system over a doodle by Andy Warhol that the actor says was erroneously donated to the institution following the death of his longtime partner Farrah Fawcett in 2009.

The complaint — the latest in a series of legal volleys between those two parties — alleges that the napkin drawing in question “is inscribed by Warhol ‘To Farrah F. and Ryan O.,” and is in fact Mr. O’Neal’s as much as it was his girlfriend’s.

Mr. O’Neal and the university system have been locked into a legal battle since the beginning of the summer, when the school claimed that a Warhol portrait of the actress, currently owned by Mr. O’Neal, was left to the institution in her will. Some press outlets put that paintings value $30 million, though Marion Maneker of the Art Market Monitor blog said it was most likely a “minor fraction of that number.”