Chairman of the 39th District GOP, Ryan insisted he wasn’t appearing before the Redistricting Commission in that capacity.

He just wants Garrett (pictured) to stay where he is right now: in office.

“It is a suburban district,” Ryan said of the 5th. “It’s no different from an urban district (where urban citizens have their own demands). The suburban part of our state is entitled to have a unity so (constituents) can have a common representative … a legislator familiar with the needs of the district.” 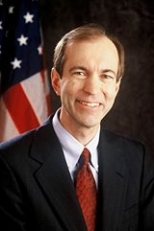