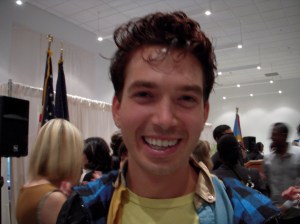 Sources close to Ryan Trecartin tell us that the artist has left his New York gallery, Elizabeth Dee. The gallery is listed as the producer in the credits for a number of his films.

Mr. Trecartin began showing with Elizabeth Dee in 2007 with the feature-length film, I-Be Area. The show was a huge success and Mr. Trecartin went on to appear in the 2009 “Younger Than Jesus” exhibition at the New Museum, where he was singled out as a highlight. Mr. Trecartin’s show at MoMA PS1 this summer, Any Ever, was a commercial and critical smash, receiving almost universal acclaim from the likes of The New York Times, The New Yorker and Artforum (as well as this paper). It also garnered accolades when it debuted at the Museum of Contemporary Art in Los Angeles. We have no word as to where Mr. Trecartin will land, but a source said he is looking at a number of options for representation in New York.

“There’s not one gallery of major significance that is not going to take an interest in what he’s doing,” the source said.

Mr. Trecartin could not be reached for comment. He still shows with his dealer in Paris, Marion Dana.

Mr. Trecartin’s name still appears on Elizabeth Dee’s web site, along with his collaborator Lizzie Fitch. On separate occasions this afternoon, no one picked up the phone at the gallery when we reached out for comment.