As the new CEO on The Office, James Spader has been killing it. The season premiere saw the 80s star return as the enigmatic and semi-threatening Robert California taking Dunder-Mifflin’s “winners” out to a special lunch. After asking Jim an innocuous question about Sesame Street, he went off on a diatribe about the significance of one of its major characters.

“Elmo. God save us… the Elmo era. Sesame Street was created to reflect the environment of the children watching it. The complete self-absorption of Elmo is brilliantly reflective of our time. Our’s is a cultural ghetto. Wouldn’t you agree?”

Yes. We agree! Don’t stare at us with your cold, reptilian gaze, Mr. Spader! Not only do we agree with you, but we’ll raise you one better: That Sesame Street‘s introduction last night of “Lily,” a Muppet whose family lives below the poverty level, is proof that the show is not even trying to be subtle anymore about reflecting America’s current economic crisis.

In a special episode called “Growing Against Hunger,” Elmo comes face to face with a character who represents the 99% demographic that Occupy Wall Street is always using for their slogans. Lily is “food insecure” because her family can’t afford three meals a day since the recession hit. Welcome to the real world, kids.


The producers of the PBS show have said that they have no plans to integrate Lily into the cast following the special. Right, because we don’t want to make Sesame Street into an actual ghetto, right? 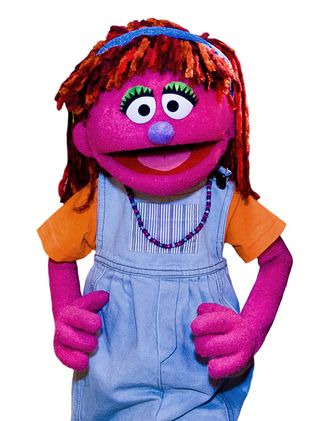