Last weekend’s arrests at Citibank have been thoroughly documented. The demonstrators have their side of the story (as they are told by the white shirt officer who arrives on the scene), and the police/Citibank have theirs. But before now we had not seen the footage of the undercover detective that Marshal Garrett, one of the men arrested that day, had spoke of. This officer infiltrated the protesters’ group, made the largest scene out of the whole occupation, and then barred protesters from leaving.


Since the undercover officer on duty won’t give his name (clearly he is not just making a citizen’s arrest: when the police arrive they immediately turn to him and ask “Is this them?”) and can be seen shoving an older woman who is trying to exit the bank, we’re putting the call out: Can someone identify this man so he can give his side of the story? Let us know!

Update: In case anyone was unconvinced that he was an undercover cop, an eagle-eyed tipster pointed out that you can see his badge around 1:55 of the video. Screenshot below. 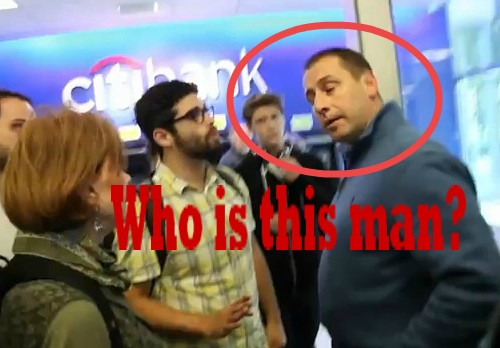