MANVILLE – Mayor Cory Booker’s SUV landed in the slush outside the bowling alley here, depositing the Democratic Party star in the loving arms of beleagured suburban Dems on the week before Election Day.

Few believe he will run for governor against Chris Christie in 2013, but he has been visible and requisitely inspirational throughout this campaign cycle, playing the party’s locker room Leonidas for entrenched and no-hope Democratic candidates alike.

After broad-brushing most of his anecdotally driven remarks, Booker supplied a few red meat bullet points to give himself an opening to run statewide at the state level.

“The Republicans don’t have the answers,” he said in Dem leader mode – then hedged with what sounded like a minor correction to keep polished his bigger-than-party brand.

“The Republicans don’t have all the answers,” he added, before ticking off his problem spots with Republicans, panning the governor’s veto of the state earned income tax credit, NJ After 3 cuts, deregulatory efforts harmful to the environment, etc.

In an alley bar where the pool tables still had the covers on them, the mayor culled from among his greatest hits, delighting the crowd of about 60 people with biographical power chords that included the one about his early days as a college football star: the catch, the run, the near touchdown, the coach’s lump-in-the-throat lesson after the game.

The Tony Robbins headset messages included team work and never giving up, and these were massage points for a county organization long used to getting carried off the field on Election Day – on stretchers, not shoulders.

Redistricting put a crack in the drawbridge of longtime GOP stronghold LD 16 – rerouting the Princetons and South Brunswick into the laps of veteran state Sen. Kip Bateman (R-16) and Assemblyman Pete Biondi (R-16) and giving Dems enough juice to play for an Assembly win.

Lending his presence to the effort, Booker said he would give Somerset County Democratic Chair Peg Schaffer $1,000 if she beat him in bowling.

With a whooping crowd at their backs, Booker and Schaffer walked out to a lane. Each gripped a ball.

The mayor went first, powering in a shot that left him with a single spare. On his second roll he pounded the lone sentinel down with ease.

Schaffer stepped up next and threw a toss that sent a groan through the locals. She had left a handful of pins upright and Booker appeared in a good position to walk through the door with his checkbook intact.

Then the Somerset chair stepped up and cleared  the deck to earn a tie. 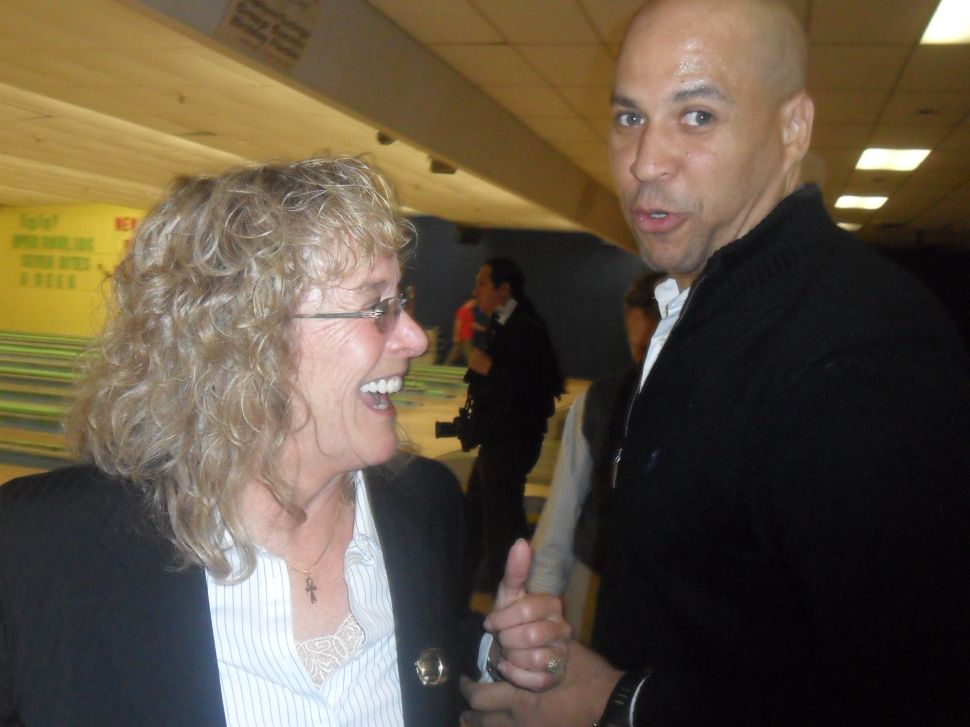