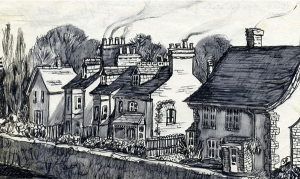 An exhibition of 44 ink and pen drawings by Sylvia Plath will be shown for the first time, at the Mayor Gallery in London. Plath would have turned 79 today. She committed suicide in 1963 when she was 30 years old.

The Telegraph has a selection of the drawings on their website and the work is surprisingly whimsical. One drawing, called The Bell Jar, features a pair of patent leather shoes. The Telegraph links the image to a passage from Plath’s novel of the same name:

“I had removed my patent leather shoes after a while, for they foundered badly in the sand. It pleased me to think they would be perched there on a silver log pointing out to sea, like a sort of soul-compass after I was dead.”

Such ominousness is absent from the image, though. The drawing looks more like an illustration in an old fashion magazine. Plath chose to pursue literature instead of art at the age of 20. Her images are full of quotidian scenes and objects like a kiosk in Paris, a Chianti bottle and, in the strangely cartoonish “Curious French Cat,” a black cat poking its head out from behind a wall. Such a child-like sense of humor seems to directly oppose some of Plath’s darker work, but it still brings to mind certain lines and images–like this one from “Lady Lazarus”: “And I a smiling woman/I am only thirty./And like the cat I have nine times to die.”