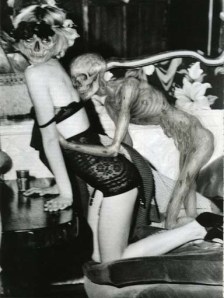 “Invitation to the Voyage” could easily pass for a small museum show. But the group of paintings, photographs, drawings and prints, along with one sculpture, by more than three dozen artists—ranging in time and style from Odilon Redon to Edward Burne-Jones to Louis Eilshemius to Elizabeth Peyton—that it comprises are so brilliantly balanced and counterbalanced that their assembled weight sits comfortably in the two modest rooms of Algus Greenspon Gallery.

The pieces are arranged in a series of pictorially and thematically related groupings, beginning with the pairing of a 2009 drawing by Fumie Sasabuchi with an 1898 etching by Max Klinger. Ms. Sasabuchi draws skeletal zombies in black ballpoint over pages from fashion magazines. In this untitled example, a woman with white legs, wearing black heels and black lace—the original ad is also in black and white—kneels on an ottoman, and bending over a table, while a disemboweled zombie embraces her from behind. Echoing the ropy fleshiness of Ms. Sasabuchi’s zombie’s arms are the spiral columns of Klinger’s Tote Mutter, in which a wide-eyed baby stares out at the viewer from atop his mother’s daisy-crowned corpse.

The sex appeal of black and white was the foundation of some of Freud’s most important work, not to mention more than one Madonna video, but what drives the sex appeal in those cases is the sense of simultaneously knowing and not knowing. In this case, however, we’re shown a straight temporal progress between the one state and the other. In the Romantic Tote Mutter, you don’t know what it is that moves you; then, in Ms. Sasabuchi’s drawing—in which the model too has a skull drawn over her face—you immediately do. (And now that you know, isn’t it funny the way the guts fall out?)

The rest of the show’s groupings emphasize other conceptual dichotomies or psychological axes, but continue to seesaw with Medieval glee between Eros and Thanatos as they demonstrate how and why postpsychoanalysis art has come to resemble a pre-Reformation burlesque.

The vulgar drive behind the romantic symbol is in three early-20th-century porcelain plates hand-painted by Florine Stettheimer. A giant pink rose, on the middle plate, hides the naked lap of a reclining woman. Beside them, a small, 2005 oil painting by Iris van Dongen, in photo-snapshot colors, shows It Girl Chloë Sevigny somehow failing to see another pink rose that hangs directly in front of her face.

Beyond this small monument to the psychological persistence of the ephemeral is a larger constellation of artworks orbiting around death, glamour, emptiness and the color black. There is Agustin Fernandez’s untitled 1963 oil of an astronomical orifice, a silver print from David Wojnarowicz’s Arthur Rimbaud in New York series, an Odilon Redon lithograph of an angel in a black cap with an overturned scythe, and Carlo Mollino’s untitled 1950s color photo of a naked woman posing in a swan mask. On the far left, the dreamy looking woman in a high collar in an 1890s red chalk drawing by Vincent Jerace appears to gaze back toward the Fernandez, as if all the images in between them formed the cloud through which she sees the world.