Even if you’re not quite sure where you land on the Occupy Wall Street debate (perhaps you are Warren Buffett-type, who believes in capitalism and the markets and even personally bailed out banks, but also believe in the people’s right to assemble; or perhaps you just couldn’t be bothered to pay attention yet), you still might be interested in OccupytheBoardroom.org, which provides the straightest line from your laptop to the desk of a Citigroup executive.

Launched on Saturday, Occupy the Board Room is a new site that provides those with a valid email account an opportunity to choose a “pen pal” in the top 1%, to whom they can voice their frustrations about America’s economic issues. Created approximately 3 weeks ago, the site originally intended to release the email addresses of almost 200 bank executives to the public. But according to one of the site’s co-founders, Olivia Leirer, research revealed that if the group released that information, they could be prosecuted if their call to action unwittingly crashed the email servers of the nation’s biggest banks.

“It’s part of a new interpretation of the Computer Fraud and Abuse Act,” Ms. Leirer told The Observer by phone today. “And of course, it’s not our intention to cause any harm.”

Instead, OTBR has figured out a way around the process by having people write in their letters to a group blog, which then digests and tags the appropriate representative, who will receive the emails. At least ostensibly that is how the program should work: Ms. Leirer told us that the site’s lead developer dropped out a week ago, leading the members of Occupy the Board Room to reach out the OccupyWallSt.org, where the Internet working group donated some of their “most creative volunteers” to the cause.

Over 4,000 submissions have been received thus far, and Ms. Leirer—the communication director for New York Communities for Change—says that the aim of the site is to provide people an open-ended forum. Taking their cue from the Occupy Wall Street movement, Occupy the Board Room asks that no website that posts about the new program uses any sample messages as a guideline, to avoid a non-organic structural system that OWS has so studiously avoided.

Of course, Occupy the Boardroom does provide another option besides being part of a mass email/blog: Users are encouraged to go make “BFFs” with the bank executives listed on the site, which can include anything from “paying them a visit” to “pursuing them to the ends of the Earth.” To avoid a lawsuit, the site won’t provide contact information for anyone listed, but does encourage you to use Google to find the person of your choosing.

Perhaps one of the most interesting things about Occupy the Board Room is its coalition: founded by formal labor groups and organizers, the 80+ legitimate organizations involved with the project represent the next stage in true movement building with their direct call to action. 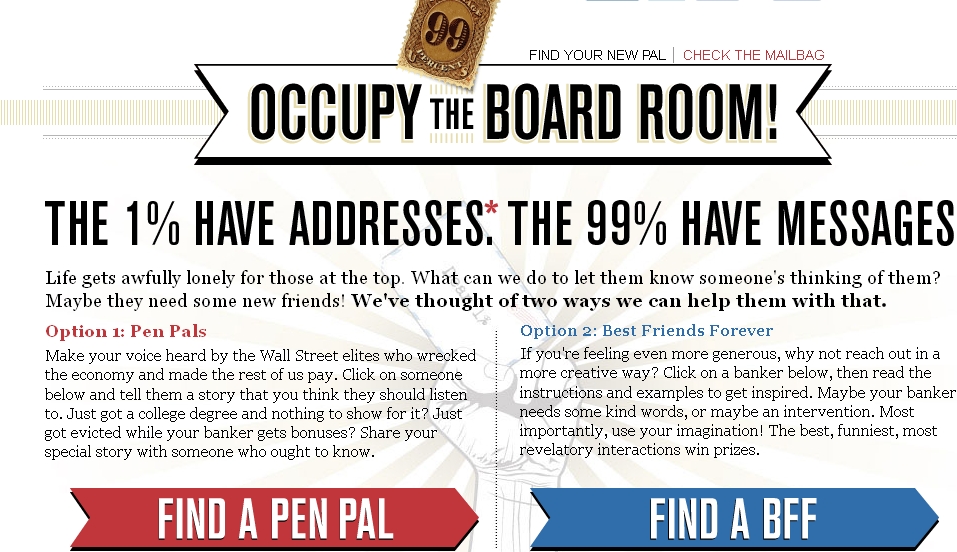