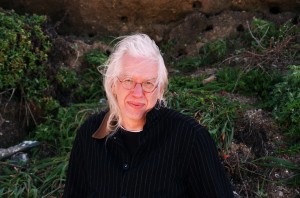 In 1977, not so long after moving to New York from Wichita, Tom Otterness shot his dog and filmed it for a video called Shot Dog Film. For many years, there were not a lot of repercussions for Mr. Otterness. In 1980, he went on to help organize the CoLab art collective’s famous “Times Square Show” (the press release mentioned, almost impressed, that Otterness was “already notorious for having executed his dog on video tape”). He now makes cartoonish sculptures like the ones that adorn the 8th avenue and 14th street subway station or the large playgrounds at luxury apartment buildings like Silver Towers on W. 42nd  street. The artist and critic Gary Indiana recalled the dog incident in an article in New York Magazine in 2004 about the New Museum’s “East Village USA” show. Mr. Otterness was included in the exhibition. Mr. Indiana said he was “repulsed” by the decision and went on to say Mr. Otterness was:

“A sculptor of limitless nonentity despite his demonstrated skill at conning public-art commissions and taste-impaired collectors into making him rich. Mr. Otterness, once upon a time, adopted a dog and then shot it to death for the fun of recording his infantile, sadistic depravity on film.”

In an article we wrote on Mr. Otterness this year, he mentioned that he makes millions of dollars for some private commissions. We concluded, “The man who shot his dog for art currently makes an average of seven figures for large private commissions in someone’s backyard.”

In 2007, Mr. Otterness finally issued an apology for Shot Dog Film. At the time, the issue had come up once more on blogs as one of the sculptor’s pieces was set to be installed in a park in DUMBO. The Brooklyn Eagle contacted Mr. Otterness and he issued this statement:

“Thirty years ago when I was 25 years old, I made a film in which I shot a dog. It was an indefensible act that I am deeply sorry for. Many of us have experienced profound emotional turmoil and despair. Few have made the mistake I made. I hope people can find it in their hearts to forgive me — Tom Otterness.”

After being buried for many years, it has become increasingly apparent that the memory of this video will not be easy to live down. 2011 has not been a great year for Mr. Otterness. Here is what happened when we confronted Mr. Otterness about Shot Dog Film earlier this year.

When The Observer visited the artist’s Gowanus studio, he anticipated our question.

Why did he kill his dog for the sake of video art?

“What the fuck do I do with this?” he said. He grew visibly upset. “Certainly the scene it was part of–it was in the context of the times and the scene I was in.” He began again. “It is something–I’ve grown to understand that nothing really excuses that kind of action. I had a very convoluted logic as to what effect I meant to have with that video. Whatever I had in mind, it was really inexcusable to take a life in service of that.”

A foot-tall bronze statue of a dog, done in Mr. Otterness’ comic, through-a-glass-darkly style, sat on a desk facing its creator, not quite smiling.

It is worth mentioning that several alternative headlines were tossed around for this piece including “The Return of the Dog Killer” and “A Portrait of the Artist as a Young Dog Killer.” Both seemed in poor taste, making light of a situation that is not funny in the least. (The article’s subhead turned out to be “Tom Otterness Now Takes Shots at Capitalism, Not Dogs”).

In September of this year, Mr. Otterness was given a $750,000 contract for an installation in the Central Subway project in San Francisco. According to the San Francisco Examiner, the San Francisco Arts Commission was unaware of Shot Dog Film when they had contracted Mr. Otterness. The San Francisco mayor put the project on hold after learning about the video as well as a subsequent petition signed by politicians and animal rights activists.

Lois Baum, president of Animal Rights Advocates in upstate New York said, “What we would like to see from him is for his commission, or at least 50 percent of his commission, to go to local animal rescues. That would show sincerity to his apology.”