Us: Oh, you know, it’s that thing where really rich kids who went to Harvard roll around in dirt and then make a lot of noise about being part of the 99 percent.

Seth Meyers: That doesn’t sound like a very good club.

Us: Obviously you do not read The New York Times, Seth.

That’s right: Earlier this week The Noctornulist (the paper’s late-night party blog/column) sent Sarah Maslin Nir down to overnight it in Zuccotti Park, which is definitely where all the after-after-after-parties are happening. And to be fair, Occupy Wall Street does have the elements of New York’s most exclusive parties: celebrities, drugs, free food, not enough alcohol, Liberal Art graduates who want to get into really intense discussions about social issues, etc., etc.

Here’s what Ms. Nir came back with:

Nearby, Nocturnalist ducked under a tent flap into the mortuary glow of a blue tarp shelter, where a cluster of self-described anarchists sat on a sofa and passed around a Guinness at midnight. Even here, they said, class hierarchy oppresses. They were the “real” poor, they said, with no place to go home to, no place to shower and no shiny laptops for blogging the revolution. “When I write,” one said, “it’s on a pad and paper.” Others toasted.

Part-ay! Eventually the reporter was forced to leave around 5:40 a.m., not because the couple next to her was having sex (which they were), but because two guys started brawling. Fisticuffs! No party is complete without a fight and watching two people have sex right next to you.

Based on Ms. Nir’s article, The Atlantic’s Eric Randall decided that enough was enough and listed all the things Zuccotti Park wasn’t: a restaurant, a club, a concert, a runway, or an art gallery.

We beg to disagree! Just because the media started paying attention to 1 Liberty Plaza as the home of Occupy Wall Street protests, that doesn’t mean that we have to take the 33,000-square-foot outdoor venue so seriously. There are a lot of things going down over there…and yes, that includes free concerts, celebrity-sightings, art shows, and attractive people showing off their best protest-chic ensembles. If these help draw a different kind of publicity to the movement than just the network news crews, isn’t that legitimizing the space as a New York institution? If anything, we should be celebrating Zuccotti Park for being all those things listed above, and more!

Like did you know that Occupy Wall Street was also currently serving as:
– Your Oberlin/Wesleyan College Reunion space
– A singles mixer
– A yoga/meditation center
– A socially conscious tech start-up event
– The new brunch spot for half of City Council
– A fully-functioning library with Friday poetry readings

We’re putting the call out now: we’d like to see more than just the MSM and New York metro blogs cover Occupy: Let’s get Women’s Wear Daily, GuestofaGuest, Grub Street, Art Observed and RackedNY down there as well!*

*Note: We do know that Grub Street has covered some food-related stuff on OWS, and GuestofaGuest did put last Friday’s march under “The Best 2K I’ve Ever Spent!” column. 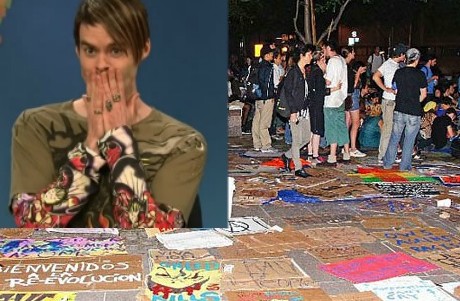