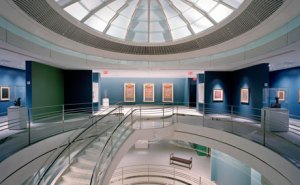 The museum. (Photo courtesy of NYCgo.com)

In your later years, do you find yourself wishing that they’d make a version of From the Mixed-Up Files of Mrs. Basil E. Frankweiler starring middle-aged yoga enthusiasts rather than precocious children? Well, step right up! Because that basically happened over the weekend.

On Saturday night, the Rubin Museum of Himilayan art on 17th Street invited some 80 people to sleep over at the museum at a $108, sold out event called “Dream-over.” Bloomberg‘s Philip Boroff chronicles the 13-hour event, in which participants sleep under the museum’s works, and then discuss their dreams with a “dream gatherer” (psychology grad student) in the morning. “I hope I don’t have a sex dream and have to talk to someone about it,” says one participant. Right.

The practical takeaway is that the Rubin is looking for a bit more publicity these days. Expect big things in the months to come.