(Note: Some of this article appeared in an earlier article, titled Organizing the Occupation: Wall Street, Post Megamarch.)

What a difference a week makes. The weather was unseasonably mild on Friday afternoon, and as The New York Observer strolled around Zuccotti Park, the atmosphere still had the feel of a Ren Faire that had wandered into the wrong neighborhood. But there was definitely something different in the vibe over at Occupy Wall Street H.Q. Since the unions called out the troops last Wednesday, marching in solidarity with the protesters, the demo has skewed older—for instance, a pair of women standing in the front of the park looked as though they’d qualify for discount movie tickets. They held signs that read “Pissed off Grey Hairs say ‘Jail the Wall Street Bastards.’”

A transformation was underway. What had once seemed like a hastily assembled urban shanty town, thrumming with organized chaos, was, by Friday, beginning to look like a semi-permanent encampment, with every section of Liberty Plaza maximized for efficiency.

The twice-daily General Assemblies had become so large, the “human microphone” would have to repeat each line twice, the words rippling outward. By the weekend, someone would create a closed-captioning system, projecting the speakers’ words on a screen.

Tourists had found the place—now a must-see on any visitors’ itinerary—and with them vendors from Times Square and the nearby World Trade Center site, hawking miniature Wall Street bulls, snow globes, pins of African-American leaders. (For now, there were still no “I Occupied Wall Street” T-shirts or tambourines printed with the Guy Fawkes mask—someone should get on that.) The food trucks flanking the park weren’t seeing much action, but the occupiers did not seem to be lacking for sustenance. There was a food donation area for dry goods and such, as well as a “food fund,” sponsored by the Alliance for Global Justice (where OccupyWallSt.org has been registered as a nonprofit). Monetary donations could be made at WePay.com. Pizzas were delivered on a regular basis from Liberatos Pizza, a few blocks away, which early on set up a deal by which sympathizers could order the special “Occu-Pies” online and have them sent to the park. On most days, the food served for free in Zuccotti Park leaned toward the vegetarian sprouts-and-couscous type fare that one would expect to see at a Liberal Arts college co-op. Whole Food runs are not unheard of.

There were also stacks of bottled water, and an irrigation system opposite the food line—part of the compost and waste disposal system set up by a group called Mobile Design Lab.

Around the perimeter of Liberty Plaza, various advocacy groups had set up folding tables, seemingly out of nowhere. They offered services ranging from green-energy alternatives (communityenergyinc.com, a renewable-power company that has partnered with ConEd, an arrangement the group had “mixed feelings about,” according to a spokesperson) to a “Free Law Counsel” area, where a passer-by could pick up an information packet about applying to CUNY’s law school.

There was a group called Coaching Visionaries, which was formed less than a week ago, comprising Certified Professional Coaches who were a little bit murky on whom they were coaching and to what end. “Our website doesn’t have a lot of stuff on it yet,” one of the women behind the desk admitted. Another woman thrust a piece of paper in front of us. It read “Johnson & Johnson Suspected in Attempted Murder,” and directed readers to FlossRings.com. We also encountered a representative from AVAAZ.org, an online petition group that broadcasts in 14 different languages and promised to have a ticker of the total number of signatures running soon.

Over near the food trucks we ran into Chris Martenson, Ph.D., who was telling people about his new book, The Crash Course. While he opined about the crisis in the global economy, we realized that the cameraman filming us wasn’t from a network; he was doing a documentary on Dr. Matenson that we had inadvertently consented to be in.

Farther into the park, near General Assembly’s growing media center, Richard Brodsky, the former New York assemblyman, was talking to a man with a fake Fox News camera made of cardboard.

“Look, this is the best thing since sliced bread,” Mr. Brodsky said, gesturing to the park, “There is no structure, it’s more of a statement on how people should be treating each other than an institute of public policy. Change isn’t made through public policy wonks, it’s made organically.” Then he left us to go find someone from ABC with whom he had a real interview scheduled.

We began to wonder if anyone realized that that Fox News camera was fake. (So was that Sarah Palin impersonator walking around.) While demonstrators encountered during the first week sometimes struggled to articulate a vision, everyone at the park now seemed soundbite-ready, and could discourse about their particular cause at the drop of a Rasta cap. Zuccotti’s demographic was less 99 percent that afternoon and more 50-50: half journalists (or citizen journalists), half protesters. Sometimes the two groups would switch parts, and the person being interviewed would lift cameras or cell phones and start firing questions at the news teams.

This was what democracy looked like three weeks into the occupation: less Bonnaroo, and more “college job fair.” The movement newspaper, The Occupied Wall Street Journal, published its second edition right on schedule, and added one in Spanish. The president had weighed in. Things were humming.

The shift away from the free-wheeling anarchy of the early days of the movement—way back in late September—has not left everyone happy.

“A lot of the original protesters are pissed that the Libertarians are joining up,” one General Assembly regular told us, insisting on anonymity and going on to warn darkly that “there are some Tea Party people here too.” This floating fear of being usurped by an influx of hard-core right wingers seemed to be based more on the media’s theorizing than in reality: several articles comparing the Occupy movement to the Tea Party had lead to what a ’60s counterculture radical might call “a bad scene.” We spent all day looking for a possible Tea Party member or Ron Paul sympathizer and came up empty-handed. (Maybe they only show up during the marches.) On Sunday, though, the Slovenian philosopher (and friend of WikiLeaks founder Julian Assange) Slavoj Žižek told the assembled that they should try to actually try to openly recruit Tea Partiers to the cause, not dismiss them. “They may be stupid,” he said, “but don’t look at them as the enemy.

Though Occupy Wall Street has no official religious affiliation, sympathizers of the movement held a Kol Nidrei Service for Yom Kippur on Friday night that drew hundreds of mostly 20-somethings to the plaza in front of the Brown Brothers Harriman building, across the street from Zuccotti. Four rabbis adorned in white led the reading of machzor, the prayer book, while the audience followed along, only slightly distracted by the wafting aroma of grilled lamb and chicken from the halal trucks that are perpetually stationed around the area. The loud drum circle being held simultaneously in Zuccotti Park—along with the human microphone technique employed by the rabbis—were also minor hurdles in following the services, though no one seemed to mind.

The service touched on politics, but only briefly. In addition to the traditional sins listed in the Alvenu Malkeinu prayer, the supplemental material noted a few more: “We have sinned … by being cynical about the world …” worshippers chanted, “by not defending Israel … by not defending Palestine.”

In a Sunday editorial, The New York Times (sounding a lot like a speaker at General Assembly) offered a forceful defense of the movement, in particular its much-criticized lack of concrete demands: “At this point, protest is the message,” The Times declared. “Income inequality is grinding down [the] middle class, increasing the ranks of the poor, and threatening to create a permanent underclass of able, willing but jobless people … the protesters, most of them young, are giving voice to a generation of lost opportunity.”

The editorial marked a new legitimacy for the protests—lending the whole thing the feel of a speeding bandwagon, with onlookers (including Kanye West) angling for a foothold on which to clamber aboard. 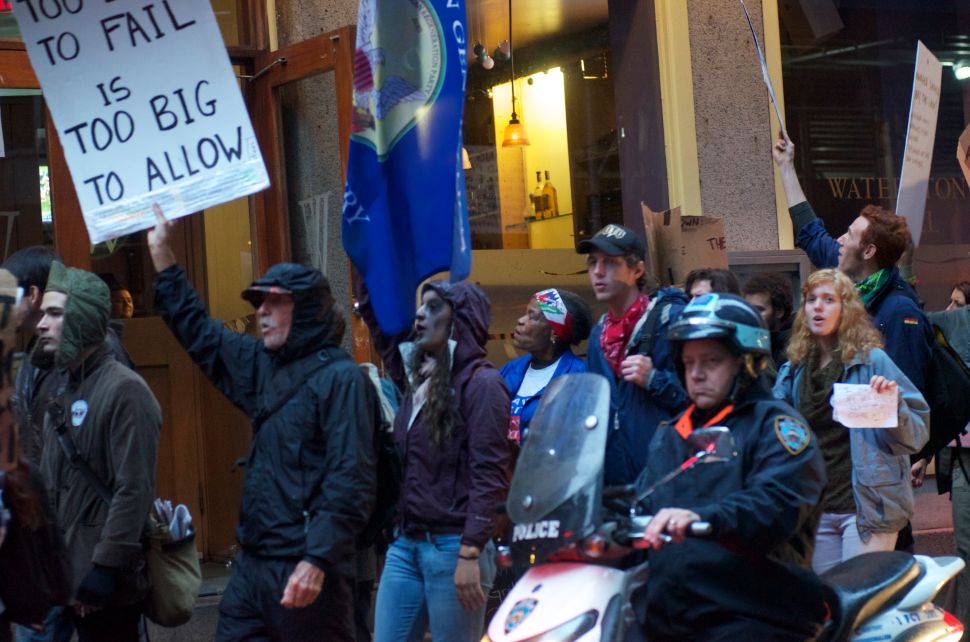