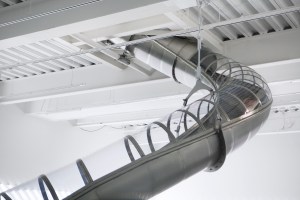 At one point in his speech welcoming journalists to the press preview for Carsten Höller’s new exhibition, “Experience,” New Museum curator Massimiliano Gioni reminded the assembled press that the artist had trained as an etymologist.

“You might feel like an insect as you go through the show if you wear these goggles,” he said, holding up a pair of the artist’s Upside-Down Goggles (2009/2011) which are available for rental at a desk near the entrance and render a wearer’s vision inverted. “These goggles turn your vision upside down and around, it’s one of the simplest and most incredible experiences I’ve ever had in my whole entire life.

Our experiment began at the booth opposite the elevators, where some extremely friendly attendants made us sign a waiver that cleared us for both the slide that goes between the fourth and second floors and the massive sensory deprivation tank on the third floor, if we felt inclined to strip down at this hour. A separate set of waivers, and a credit card, were required for the goggles, which cost $1,500 if you break them, and the attendants were very serious about those. Gallerist asked if we could try a pair without one and only moved two steps away from the rental desk before an attendant said “Sir! Sir!” urging us back to the desk and quite possibly gesturing at us. The bottom of a fellow journalist’s fleece suddenly crept into our field of vision from above. The journalist raised or lowered her hands. “Sorry if I’m close to you!” was all we could say.

The goggles are not at all recommended for the slide itself. We heard the woman ahead of us scream like a siren for a sustained five seconds before she stopped. Next to the entrance of the slide is a carousel-sized swing contraption reminiscent of a carnival ride and built out of mirrors. The swings rotated very slowly and camera crews recorded journalists meandering by as they sat on the swings and scribbled their impressions. Above the slide entrance was a series of elaborate bird cages with live birds hopping everywhere, spooked by the flash bulbs. A man in all black manned the tube, using a walkie-talkie to see when the landing pad was clear.

After tucking our notebook into our jacket, and our feet in the bottom of the provided burlap sack, we essentially went down the slide diagonally because our legs are a little longish, and the slide is severely curved. The combination of the two lead to serious dizziness and we landed at the bottom completely disoriented. Someone laughed as we landed, but it wasn’t a concern. We were too busy trying not to trip over the neon animal statues very near the landing area—a dolphin, a crocodile, a walrus. The walls of the second floor were covered in white neon lights that flashed in halves, first one half, then the other. Along the back wall of the second floor were cubicles with sensory experiments, 3-D goggles and other things incompatible with nausea.

We stuck our head under a concavity that looked up into an aquarium. That helped.

“Okay that’s all,” Mr. Gioni had said before he unleashed the journalists on the exhibition. Then he placed a pair of the goggles on his head and flipped them over his eyes. “Beam me up, Scotty!”