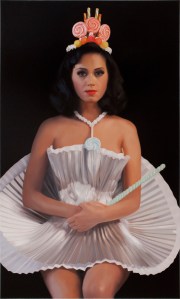 “The only thing that interested me was desire and pleasure,” said Will Cotton, the painter. We were sitting in the Core Club on 55th Street, where Mr. Cotton’s portrait of Katy Perry, Cupcake Katy, is on public view in the lobby. Mr. Cotton was talking about why he started painting hyper-realistic pictures of an apocalyptic Candyland.

“It was in the mid-’90s,” he said. “I was painting a lot of advertising icons like Twinky the Kid and the Pillsbury Dough Boy. I was really into finding a painting iconography that I could relate to. Candyland, the board game that many of us played as children growing up, that’s this place where it’s all about pleasure, all the time. That was the only story I wanted to tell.”

Mr. Cotton started with donut landscapes and pudding swamps; gingerbread trailer parks and root beer waterfalls. When he decided to populate these environments with people, he could think of only one kind of inhabitant: pin-up girls.

How appropriate, then, when he received an email from Katy Perry asking about buying one of his paintings. Mr. Cotton asked her to come by his studio to pose for him. She wanted to be painted on a cotton-candy cloud, an image that eventually made it to the cover of her album, Teenage Dream. She showed up with an entourage of hair, make-up and costume people (“even though there was no costume,” Mr. Cotton said). For the shoot, they used real cotton candy. Mr. Cotton always makes detailed maquettes to paint from, many of them to scale so that models can inhabit them. His studio is frequently covered in ice cream and frosting. Using a cotton candy machine, they made piles and piles for Ms. Perry to lie on.

“You know as a material it just disintegrates really quickly,” Mr. Cotton said. “It just doesn’t last long. We had to keep throwing more and more on to the pile. It gets really sticky and Katy is getting really sticky and has to get sponged off.”

“It was a really, really fun day,” he added.

The painting in the lobby of the Core Club shows Ms. Perry sitting, wearing a cupcake wrapper dress. Mr. Cotton said it will be up as long as Mary Boone, his dealer, lets them keep it.

At a talk last Tuesday about his work in a small theater at Core Club, Mr. Cotton discussed his style and how it has progressed. If anything, he has become increasingly ambitious. In May, he will have a solo show of paintings at Mary Boone Gallery’s Fifth Avenue space—his first exhibition with her since 2009—and in November, he will participate in the Performa biennial. The piece is still coming together, but he asked John Zorn to compose music based on cotton candy and Charles Askegard to choreograph three ballet dancers in a large set built by Mr. Cotton. In the theater, he was showing the audience slides of his work. He came to a painting from 2010 called Apennine, which features a woman lying in a pile of vanilla ice cream.

“Is she in real ice cream?” someone in the audience shouted.

“Yes,” Mr. Cotton said. He chuckled and then sighed, his face looking like he was recalling the day the model came to his studio to pose. “So much real ice cream,” he continued. “She was a good sport.”