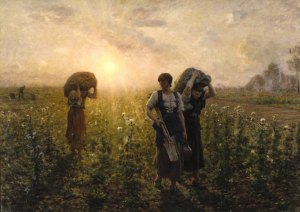 "The End of the Working Day" (1886-87) by Jules Breton, in the collection of the Brooklyn Museum.

Today, however, word came across our desk that the U.S. is returning to France a painting by the French Realist artist Jules Breton (1827-1906) that was stolen by the German army in World War I.

The news was released by U.S. Attorney Preet Bharara in Manhattan in conjunction with the U.S. Immigration and Customs Enforcement (ICE).

The work in question is a Breton that dates from 1876, called A Fisherman’s Daughter/Mender of Nets, which had been in the collection of the Musée de Douai, in Douai, France, until occupying German forces took it in 1918.

The work was located last year in a New York gallery by French authorities. After consultation with various experts, the work was seized in July.

“[O]ne of the very few ways that we are able to redress the awful legacy of war is to return stolen art to its rightful owners so it can be shared and enjoyed,” Mr. Bharara said in a statement. “In this case, it took nearly a century, but it is nonetheless extremely gratifying.”

Works by Breton are in the collections of the Metropolitan Museum of Art, the Museum of Fine Arts Boston and the Musée d’Orsay in Paris, among other institutions.