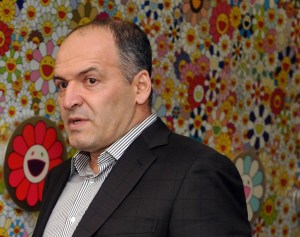 In a long interview with The Art Newspaper, the billionaire Ukrainian art collector Victor Pinchuk gives glimpses of an early plan to expand his Pinchuk Art Center in Kiev with a new building expected to be done in five years.

It’s an intimate interview that explores Mr. Pinchuk’s obsession with Japan, his friendly association with the Gagosian and White Cube galleries, and why he believes contemporary art can modernize young Ukranians. Here’s his overall collecting philosophy:

“I love very much artists like Bacon, Picasso, Rothko, but I didn’t buy a single painting by them,” explains Pinchuk, “because I think I don’t have even the smallest chance to build a serious collection of that period. Other people have already built great collections… maybe as a collector I have a chance… to make a serious contribution to the next page of this book about art history. Maybe my story will be about the period of art from 2000 to 2010 or 2020. No longer than 20 or 30 years. Maybe there is a niche for that and maybe on this page I will be one of the interesting participants. Just a few collectors have this focus, especially in this part of the world. This is important because we are one of the few institutions between Berlin and the far east, there are not many institutions in this part of the world.”

Also, the article politely reminds us that Mr. Pinchuk’s collecting began around the time his father-in-law, Leonid Kuchma, was accused of having a hand in the death of journalist Georgiy Gongadze in 2000.