Engaged in one of the most competitive contests in the state, State Sen. Jim Whelan (D-2) and his GOP opponent, Assemblyman Vince Polistina (R-2), squared off this morning in an LD2 Senate debate sponsored by the AARP.

Participating in the live tele-forum with over 1,200 AARP members, Whelan identified Gov. Chris Christie’s cuts to senior programs and his override of a bill that would have provided $7.5 million to women’s healthcare.

“We recognize government has a role to play in looking out for our seniors,” said the incumbent Democratic senator.

“We need to reform property taxes in this state so we don’t see seniors and businesses driven from this state,” said the GOP challenger. “You are forced to pay a greater share because we have had this shift in state aid. Our property taxes go up every year because of the way we fund education in this state.”

“Those things were cut when Christie first came to office,” said the senator. “Now they added some of the money back, but we’re still $800 million short of where we need to be in that program.”

“The money was there to do these programs,” Whelan objected, “but Gov. Christie and the Republicans did not allow us to put that money back in for a full restoration.”

The two candidates had substantive differences regarding the telecommunications deregulation bill.

Whelan said he opposition the bill in its current form, and Polistina, a sponsor of the bill, said he would look at an alternative measure.

“He responds to your questionaire saying he opposes the bill,” complained Whelan, “but again the record is clear, he’s one of the co-sponsors. There’s a clear difference of myself and my opponent’s position. …He would take the BPU out in terms of regulating these things.”

Polistina said he wants to attract business back to the state

“We are going to do what we can to make utlilities affordable for everyone I am a professional engineer and professional planner,” the assemblyman said. “We need to have a state that is competitive with our neighbors.”

Whelan said he supports the Societal Benefits Charge, which funds the Universal Service Fund. Polistina did not commit to supporting the SBC, although he said he does support making utilities affordable. 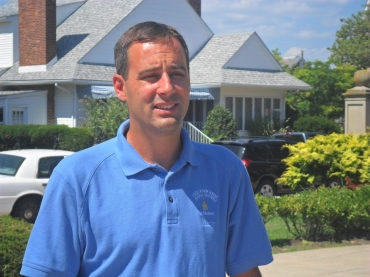