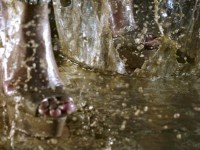 "Deluge" by Marilyn Minter. (Courtesy the artist and Salon 94)

Marilyn Minter is larger than life. Not because she works on a large scale—she’s made wall-spanning paintings and shown a five-minute video on a huge screen in Times Square—or because she’s tall, towering over many men when she’s in heels, and having to bend her head, with its electric-red pageboy, to talk with them at parties. She wears shiny dresses; she speaks loudly, and laughs loudly, and punctuates her conversation with wide gesticulations, as though swatting away a large insect. Her expansive personality, perhaps a holdover from her Louisiana childhood, is something of an anomaly in the New York art world, where people tend to hold their cards close to their chest.

On a Thursday evening a few weeks ago, The Observer paid a visit to Ms. Minter’s studio on the second floor of a nondescript building on West 36th Street. At our knock, her voice rang from within. “I’ll get it!” She ushered us into a large, high-ceilinged room, around the perimeter of which a handful of assistants were meticulously daubing paint onto metal supports. She sat us down at a computer monitor and we watched a new video, of silver letters spelling out the word “Me,” landing in extreme slow motion in a puddle of paint. Its title is I’m not much, but I’m all I think about. In a charming bit of understatement, a Post-it note bearing the scribbled words “mm @ salon 94 Oct. 28-Dec 4” dangled from a bookshelf above the computer, as though Ms. Minter’s latest exhibition, which opens at the Lower East Side branch of the Salon 94 gallery this Friday, were no more than a reminder to buy milk or printer paper.

Ms. Minter, 62, makes paintings, photographs and videos that deal predominantly in glamorous images of women glimpsed through a pane of glass beaded with water. The paintings—the mainstay of her practice—come from photographs Ms. Minter takes that are then subjected to some 80 rounds of photoshop distortion. They end up depicting high fashion that is fashionably flawed, or taken to extremes. They’re at once sweet and toxic, sugar highs laced with cyanide. A woman’s heel, snug in a stiletto, may be perfectly formed, but it’s speckled with mud. There are close-ups of mouths either ingesting or barfing up a strings of pearls; mouths disgorging streams of gold paint. (One of this latter type was in the studio. It’s called Cheshire Wangechi, after artist Wangechi Mutu, who posed for the source photograph.)

People have referred to Ms. Minter’s pieces as grotesque; she calls them “beautiful.”

A year and a half ago, when a book on Ms. Minter’s work was published and a museum show opened in Cleveland, Guy Trebay profiled her studio practice in The New York Times. He wrote about the whopping $400,000 price tags on her paintings; the client list that includes Madonna and Tom Ford. But mostly he wrote about the team of studio assistants who build up her paintings layer by meticulous layer. (She stays a year ahead of her assistants, making new source images; a batch of five paintings takes a year to complete.) He quoted her studio manager, Johan Olander, a children’s book illustrator who has been with her for 14 years, calling the operation “the closest thing there is to a Renaissance workshop.”

He also wrote of the leaner times—Ms. Minter’s descent into drugs and alcohol in the 1980s; and, after that, her critical evisceration by the art world establishment (and feminists) for her hard-core-porn-inspired paintings. After a long absence from the scene, inclusion in the 2006 Whitney Biennial put her back in the spotlight.

The Observer asked Ms. Minter how she survived those lean years. She pointed to the support of artist friends like Mary Heilmann and Jack Pierson.

And Jessica Stockholder. “She called me out of the blue when I was just getting excoriated,” Ms. Minter said. “I was depressed. It was when my dealer shut down my show a week early. I’d had this burgeoning career—me, her, Cady Noland. I thought she was a great artist. Jessica came to my opening, a group show, and said, ‘I’d like to have lunch with you.’ And I thought, she wants me to get her a job at S.V.A., because I was teaching undergraduates then. At the end of lunch, she said, ‘You know I’m a real prude and your work is really difficult for me but I think it’s really important work and I’m glad you’re doing it. And I want to do something to help. What can I do?’ I said, ‘Want to trade? I love your work.’ She took one of the nastiest pieces I ever did.”

Ms. Stockholder’s long-ago generosity may have something to do with the attitude Ms. Minter now takes.

“When I see an artist whose work I like at a party—I’m old now, so I can do this—I go right over and tell them how much I like their work,” she said. “Instantly I’m on their side. The act of saying it takes away the competition. The act of saying it makes me not hate them anymore, because they’re good.”