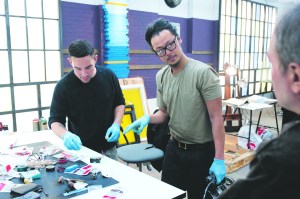 From the second season of "Work of Art."

It was a lively atmosphere on the 16th floor penthouse of the artsy Roger Smith hotel in midtown last Wednesday. Some 30 people had crammed into a small library and tucked themselves in behind white tablecloths to sip bourbon and watch the giant TV that had been set up at the front of the room. There were artists and art critics and, crucially, bingo. They were there to mock the TV show Work of Art during its second season premiere, or possibly celebrate it. With such an event, it’s hard to tell.

The bingo sheets described various outlandish things that might happen during the episode, and you’d check them off as they happened in real time, hoping to score a row. The scenarios were specific enough that you knew the staff had to have seen a screener beforehand, but it was still slightly unbelievable that all of these absurdities would come to pass in a single episode. One or two seemed reasonable, but “Someone uses a power tool,” “The deaf artist’s sign language translator makes it into the shot,” and “Jerry Saltz rolls his eyes at Mary Ellen Mark”?

The first “bingo” was declared 10 minutes into the show.

“I don’t own a television,” said Danika Druttman, who works for the hotel and organized the event. “The thing is, I’ve seen the English version with Charles Saatchi on airplanes and it was fun!”-—she referred to School of Saatchi, which aired in the U.K. in 2009—“but the art world was a bit snobby about it, like, ‘We’re so above this.’ Then here, the American version, it I feel like it got a better reception.”

Her assessment would seem sound. The Times concluded in their initial review, that “Work of Art works,” and the near-constant coverage on art blogs made the phrase “world-famous Brooklyn museum” seem a little less derision-worthy, or perhaps like a self-fulfilling prophecy. After asking The Observer whether or not Mr. Saltz, New York magazine’s art critic, was still on the show, the critic and MFA professor Dave Hickey offered another explanation for the positive press of the first season.

“Jerry’s going to lose all of his friends on this one,” he said, laughing. “Because all the critics I know in New York were being nice to him in the hopes that they would get to be one of the next critics on the show! People in New York place a high value on being on TV and getting to meet Steve Martin and things like that,” he chuckled. “It’s a sick fucking culture.”

Grab your helmets! Work of Art is back. And now that it’s something of an institution, will it ever win the art world’s hearts and minds, or are we just entering the next phase of a long war of attrition?

“I hate the show sometimes, too,” Mr. Saltz told WNYC last week, pre-empting the requisite wave of bile. “I do think that sometimes people need to get a grip, however. This isn’t a billionaire collector flying a millionaire artist to Venice to party down on a private yacht. This isn’t a billion dollars spent at auction for pieces of drivel. I think that the show may be a light thing when heavy things are happening, but I don’t think it’s destructive.”

If the show relied on people like Mr. Saltz and guest judges like Ms. Marks to grant it legitimacy, in its second season it has a momentum of its own. Everyone seems to know what it is—an extended on-camera MFA, with goofier-than-usual assignments, for artists that are possibly talented and definitely attractive. To expect more would be to set oneself up for disappointment. Moreover, its detractors have almost got it out of their system.

“I think I fully exhausted any thoughts on Work of Art,” wrote the artist William Powhida, who has blustered about the show in his work, via email. “Anna Wintour said it best when asked about Kayne West’s recent folly in Paris, ‘Ask someone else.’”

Just as Mr. West’s Twitter postings are now unremarkable no matter how ridiculous they are, there’s something to be said for extremity, and though it’s still early in the second season, Work of Art seems to have embraced its reality TV show status. It’s still early in the season, but the artists participating this year seem to be cut from cloth that is, if not the same as other reality stars,’ at least closer to that cloth than last year’s contestants. The best example here would be the season two contestant the Sucklord—a 42-year-old artist who has sold works at Christie’s and Phillips, and whose work is relatively vital compared to some of the other contestants’ offerings, but again, and this is definitely worth repeating: he calls himself the Sucklord.

“It is true that this season the artists seem to be a little less self-serious,” dealer and judge Bill Powers told The Observer. The Sucklord, he said, challenges biases in the art world in a way they weren’t able to do in the first season. “I think it’s better that he’s on the second season, because we needed to establish what the show is before we could start testing the boundaries of what art can be.”

For the people who decry the absurdity of the challenges and the punishing schedule in which they have to be accomplished, this can only be seen as a good thing. An oil painting based on thrift store tchotchke that has to be done in 12 hours? That’s a bit tricky. Some kind of graffiti-esque drawing on glass that makes no fewer than three people reference Keith Haring? Doable!

Plus, there’s a welcome distance between a working artist and a guy who makes action figures. During the premiere one woman was described at the bottom of the screen as a “figurative painter” and a woman at The Observer’s table—an accomplished, extremely talented figurative painter — bristled noticeably.

People like the Sucklord aren’t just there to test boundaries—they’re accessible, and that accessibility could be another major defense of the show. It offers the audience a glimpse of the art world, an exclusionary, often arcane-seeming place they would never otherwise see or perhaps even have any interest in seeing. Mr. Powers pointed out that Will Cotton’s appearance last season may have served as a compelling introduction to contemporary painting for fans of his Katy Perry album cover.

“When I agreed to do the show,” Simon de Pury told The Observer, “I did it not in any way for the art world, but because I thought this would allow for a wider audience to see what it is to create a work of art, or judge a work of art because there is a kind of misconception or a wrong assumption that art is for a privileged group of insiders.”

You’d think that such a sentiment might win some allies in the art world, like the acerbic critic Charlie Finch, who’s says he’s never seen the show but, when we called him, reminisced about the days when secretaries would head to MoMA on their lunch breaks. Doesn’t the show, on some level, bring us closer to those days?

“It makes art look like a trivial stupid little made-up game instead of the highest form of human creation!” Mr Finch shot back. “Oh yes, that’s really, really great. That will get them going to the museums.”

“It’s like they’re trying to turn art into some TV shit,” Professor Hickey said, adding that it reminded him of something he experienced with the 1960s Raymond Burr detective show Ironside. “It was the first TV show that had hippies on it and we had a party to celebrate the death of hippiedom, because all of a sudden hippies had come to TV. Artists don’t listen to advice, artists are not into being instructed. These kids, they’ve got makeup on!”

Since Work of Art is by no means the first art-based TV show, this accessibility or at least its bid for popularity, would seem to be the most offensive part of the show, for those inclined to be offended by it. Even when it’s entertaining, art on television has a long history of being didactic, from 1969’s Civilisation with Kenneth Clark, to Robert Hughes’s The Shock of the New in 1980, to Sister Wendy Beckett, whose habitted lectures on the Renaissance still grace PBS every now and then. And then, of course, there was the Wild West of cable access, where, in New York in the ’80s, Warhol acolyte Glenn O’Brian hosted his TV Party, a call-in show featuring downtown talent (Warhol himself eventually made his way to MTV) and Jaime Davidovich’s avant-garde The Live! Show behaved as if it didn’t care whether or not anyone was watching. These shows were no more representative of the art world than Work of Art, but then they never claimed to be about finding the “next great artist.”

Aaron Baker, art curator for Playboy and a photographer, turned down an offer from Bravo to audition for a spot last year and this year didn’t return an email asking if he wanted to try this season. He said no television show would ever be able to accurately represent the art world as he’s known it.

“Not the way that we do television,” Mr. Baker said. “But that’s not what it wants to be. Everybody wants it to be Keeping Up With the Kardashians with palette knives, they want it to be cute people involved in silly dramatic scenarios, they want shots of these kids in tighty whites being rousted from bed and dragged to Times Square for a challenge.

“Though I would say that’s a fairly accurate portrayal of art school, actually,” he added.

The way ahead for Work of Art would seem to be the direction in which they are already headed: have the show be nominally about the art world, but not at all for it. Everyone’s going to be watching anyway.