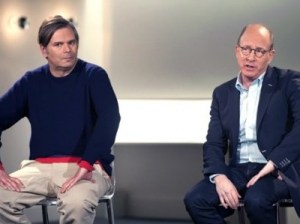 In this week’s installment of a certain Bravo reality television show, viewers nationwide were confronted with a fatal jet-skiing accident, sexual harassment, a discussion about the appropriate setting in which to consume a Pimm’s No. 1 Cup, and lots of boobs. Surprisingly enough, however, there were no real housewives involved. The television program of which I speak is actually Work of Art: The Next Great Artist, and thankfully a real artist (guest judge Rob Pruitt) dropped by before the hour ended and steered the show in the direction of, you know, ART, albeit for like 12 seconds.

The episode opened with the gaggle of remaining contestants trekking out to auction house Phillips de Pury & Company’s hallowed halls, dubbed by would-be great-artist Young Sun Han “Simon’s Place.” (But don’t forget: We’re not talking about Run’s House. That’s a different show. This is a show about ART, not about aging hip-hop icons taking bubble baths.) Upon arriving in the empty exhibition space, the artists decided to follow a trail of tin cans laid out on the floor. Because that seemed logical, and, as the Sucklord put it, someone had to “braze the trail.”

And this turned out to be not such a bad—although highly idiomatically flawed—idea, as the cans led not only to contestant-mentor/auctioneer Simon de Pury and show-host/socialite China Chow (whose hair, by the way, is getting absurdly, creepy middle-school experiment long) but also to ART. Specifically, to what looked like Andy Warhol’s Campbell’s Soup Can (Tomato) of 1962, but was in such a crappy frame, we’re betting money that it was a poster that everyone pretended was real.

“Pop is bold. Pop is brave. Pop is sex. Pop is life. Pop is fun. Pop is brash. Pop is political. So make it pop,” Mr. de Pury liltingly recited (inspired, perhaps, by Gagosian’s 2007 “Pop Art Is” show), as he assigned the artists the task of creating their own pieces of Pop art. Without a doubt, Mr. de Pury has been boning up on his “Simplest Seuss for Youngest Use”—aka “Hop on Pop”—but he’s allowed, he just had a baby.

Other important things to know about this episode before I get down to mocking the almost entirely abysmal artworks are: 1) This was a double elimination challenge, so two people got booted off. 2) No one received immunity for the next challenge. 3) The winner of the challenge got a two-page spread in Entertainment Weekly, to be viewed by 11 million readers. If you are not aware of Entertainment Weekly, it’s the magazine that has less to do with art than all of the other magazines in the world.

THE SUCKLORD
The Sucklord sucks. His art this week is not as pathetic as everyone else’s: It’s an installation “based on Charlie Sheen’s ramblings” with bottles of tiger blood, jars of warlock dust, and dolls of action goddesses. The central action figure of Mr. Sheen has busted out of his packaging, leaving only the scrawled note, “I quit.” Very funny, Mr. Sucklord. But still, he sucks. Because he’s just another misogynistic asshole on television, not unlike Mr. Sheen himself. The main revelation of this episode is that the Sucklord has a girlfriend, who’s “literally going to cut his balls off” when she sees the show, and with whom he previously “had a lot of sex adventures.” Neither of these facts, however, stop him from repeatedly asking Lola Thompson to take her clothes off, from trying to corner her physically while stating that he’s getting turned on, from commenting to Kymia Nawabi that she has “nice tits,” or from lamenting the fact that it’s not the bustier Sarah Kabot taking off her shirt in the name of art. But of course none of this televised harassment matters, because Mr. de Pury, a collector of the Sucklord’s work, likes the Sheen-ian art.