It just keeps rolling in today: first MTV decided that when seven strangers get together and stop being polite and start being real, at least one of them should be protesting in Zuccotti Park. Now a tipster “involved in the production” of Christopher Nolan‘s The Dark Knight Rises has leaked to The LA Times that Liberty Plaza would be a great backdrop in Gotham.

But are these the smelly hippies that are city deserves? Would the Batman tolerate the General Assembly? Let’s discuss!

We do know that the latest Batman film will be shooting in New York, because we went to the auditions. But could a high-budget movie really use all those protesters in a scene without their consent? That’s a boring hypothetical question! Here’s a more interesting hypothetical: if transplanted in Gotham, would OWS immediately start picketing outside Bruce Wayne’s mega-mansion, or wait a couple days? And as for the Dark Knight himself, what side of the picket line would the vigilante fall on?

In Batman Begins, we are introduced to the Wayne family by way of Bruce’s father’s contribution to the city… a buzzing transportation system. Never mind that the union of this train would probably be on strike with the Occupiers, since Batman himself  destroyed it in his epic battle with Liam Neeson‘s Ra’s Al Ghul at the end of the first film. So now a mother of three with two part-time jobs and no health insurance will have to walk to work instead of taking the Wayne Monorail (or whatever)? Thanks, Batman. Point: 1 %

On the other hand, Batman hates corporate greed, as evidenced by the fact that he fires Rutger Hauer as the head of Wayne Enterprises and replaces him with Morgan Freeman. Point: 99 %

But wait, doesn’t he actually use most of Wayne Enterprises – most likely a publicly traded company – as cover to buy and expense all his “wonderful toys”? Point: 1%

Add to that his George Bush-era surveillance tendencies as well as a complete disregard for the laws that govern society, and you basically have a Tony Balogna-on-steroids situation. One thousand points: 1 %

Batman may protect Gotham from itself, but he’s a moral grey area when it comes to tourists who don’t contribute to the city’s economy. Occupy Wall Street could even make a good villain for Batman in the form of “Anonymous Man,” who would wear a Guy Fawkes mask at all times and speak in an annoying computer voice, of course. 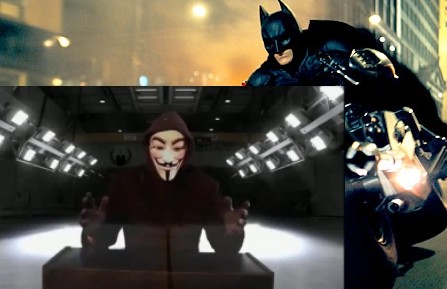