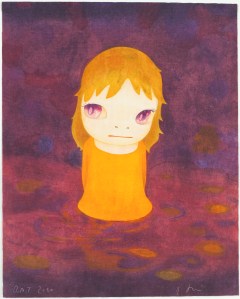 The Observer has learned that Japanese artist Yoshitomo Nara is now represented in New York by the Pace Gallery. Mr. Nara, 52, emerged in the 1990s in a wave of Pop art coming out of Japan; his paintings and sculptures, often depicting children, are influenced by comics and punk rock music. His work was the subject of a major exhibition at New York’s Asia Society Museum last year.

“He has great interest in the classical contemporary painters like de Kooning and Rothko,” Pace’s president, Marc Glimcher, told The Observer; Pace works with the estates of both artists. “I think he wants more of a connection to that.” Mr. Nara’s work has performed solidly at auction; in June a 1999 painting made $1.5 million at Christie’s, London.

Mr. Nara had been represented in New York by the Marianne Boesky Gallery. A representative from Boesky confirmed to The Observer that the gallery will collaborate with Pace next May on a joint exhibition by Italian artist Pier Paolo Calzolari.

Pace has been busy adding artists recently, with Japanese photographer Hiroshi Sugimoto and the estate of Abstract-Expressionist Willem de Kooning both moving over from Gagosian. Pace also runs galleries in Beijing and London.

Mr. Nara will continue to work with other galleries outside of New York. He shows at Tomio Koyama in Tokyo, Stephen Friedman in London and Blum & Poe in Los Angeles.