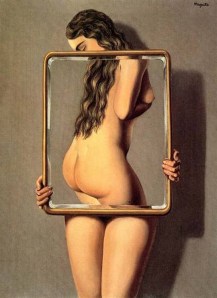 The floor-to-ceiling windows in the new Blain Di Donna gallery in the Carlyle Hotel look out on the brown marble building that houses Larry Gagosian’s uptown digs and serve as something of a contrast to that gallery’s submarinelike enclosure. The Blain Di Donna space is the former home of Ursus Books, the art-book store favored by dealers—it was here that Larry Salander racked up a tab of over $300,000 before he went bankrupt and was sent to prison. Once lined with dusty volumes, it now gleams with Surrealist paintings. Emmanuel Di Donna’s windows have no curtains, but he pointed to the soft red ones depicted at the edges of Cinéma Bleu (1925), the earliest painting in the gallery’s inaugural show, “Magritte: Dangerous Liaisons.”

“It’s very Deco,” said the Frenchman, looking at the Belgian’s picture, “but already you can see the beginnings of Surrealism.” He pointed at a figure in the foreground, as if it needed to be referenced. “Here you have this half-woman, half-fish.”

The gallery’s opening marks the beginning of a new career for the 17-year veteran of Sotheby’s and the presence of an impressive new secondary-market gallery in the city. With the support of his partner, the powerful English dealer, Harry Blain, Blain Di Donna is poised to make waves when it comes to the business of trading contemporary, Impressionist and Modern works in this city.

The gallery opens at a time when dealers and auction houses have moved toward the center of a spectrum that used to feature them on opposite ends. While dealers these days can seem to be more like international franchises than brokers of intimate sales, auction houses have recently horned in on the dealer’s best advantage—the discrete private sale—by beefing up their private sales departments. This week, just prior to the major fall auctions of Impressionist/Modern and contemporary art, Sotheby’s is opening an exhibition in its new in-house gallery, S2.

Mr. Di Donna’s office shares the same large window as the gallery, and like the rest of the space it’s quiet, sealed in against the Madison Avenue bustle below. His decision to step down as Sotheby’s worldwide vice chairman of Impressionist and Modern art last year, he said, came from a desire to try something new.

“I was supposed to find $500 million of art every year for two sales,” he said. “So that’s constant running. It’s always on a plane, always on a deadline—it’s amazing, an amazing job, amazing fun but I was seven years in Paris, five years in London and five years in New York. I think I saw all of the Sotheby’s universe and it was time for me to take on a new challenge.”

Mr. Di Donna saw his future in either art advising or a dealership. (It’s a well-worn path. Auction house specialists like Philippe Segalot, who ran the contemporary art department at Christie’s, and Guy Bennett, also of Christie’s, have traveled it before him). He came to choose the latter, he said, because he enjoys discovering art for people, rather than following their instructions. He was close with many clients at Sotheby’s and enjoys cultivating “the bug,” his word, that strikes some collectors by finding them new art to buy. He was close with many collectors at Sotheby’s, and this was in fact a major part of his job, but auctions, he said, are never going to match dealers in bug-cultivation.

“I think the auctions play on a different strength,” Mr. Di Donna said. “I think they all cultivate competition. They’ll put people in a room and sometimes you get great prices just because two guys get excited and they don’t want to give up. I’ve seen that happen many times.

“I remember an auction not long ago,” he said, “where two Russians competed against each other and the painting sold for a price that is, well, whoever bought that picture will never sell it for that price.” He shrugged. “It is a little bit regrettable but they’re big boys. If they want to overpay for something, that’s their business.”

Leaving the auction business would probably have been tougher if Mr. Di Donna were going solo, but his skills are complementary to those of his partner, and moreover Mr. Blain is the kind of ally whom anyone would want to have. The former stockbroker’s been remarkably successful since he joined the art world in 1992 (“Blain’s the name,” reads one recent article that pondered if he was the most powerful man in Britart. “Harry Blain.”) His other business partner, Graham Southern, comes from the world of auctions as well, and together the two founded the gallery Haunch of Venison in 2002, which they sold to Christie’s in 2007. Mr. Blain has extensive contacts in the contemporary collecting market and has been involved in the secondary market of Damien Hirst, who shows with their neighbor Gagosian. Through his time at Sotheby’s, Mr. Di Donna’s Rolodex covers the new gallery with regard to the Impressionist/Modern market.

Mr. Di Donna says he doesn’t see his arrival in the neighborhood as any sort of competition to the many galleries there, either those open to the public or the tonier, by-appointment-only outfits. He’s merely enhancing a part of the city that already offers impressive gallery shows. In a separate interview from London, his partner Mr. Blain differed in opinion.

“There’s a lot of competition, a lot of options for what people should see,” Mr. Blain said. “People will come to see something the first time ’round because they know you, but if what they come to see doesn’t merit their attention, they’re not really going to come back every time.”

Magritte, then, would seem to be an ideal fit. The works on display would appeal to anyone who walked in off the street—one, in fact, Le Domaine enchanté (II) (1953), is a mural from a casino in Knokke-le Zoute, Belgium. The show is playful, frequently nude and familiar. There’s a man with an apple over his face and a pipe that isn’t a pipe.

“The market is very strong for Magritte,” Mr. Di Donna said, walking through the gallery. “It’s an artist that, over the last 10 years, has increased enormously in value. … It’s also an artist that’s instantly recognizable. I think his imagery is fun, fresh, witty. There’s eroticism, there’s word play. I think a lot of the current marketing, all those images that you’re bombarded with every day, owe a lot to Magritte.”

According to Artnet, eight of the artist’s top 10 prices were achieved in the past five years. In this show, Mr. Di Donna has a work that’s in the same series as L’Empire des lumières (1952), which set the artist’s highest price in 2002 when it sold for $12.7 million at Christie’s. Mr. Di Donna’s 1954 version shares its name.

Of the 29 paintings, six are for sale, with prices that range from $700,000 to $7 million. The show marks Mr. Di Donna’s first curatorial effort and came together in some 10 months (“It is easier when you know an artist very well and you know the collectors,” he said). He stopped before the exhibit’s signature piece, Les Liaisons dangereuses (1935), which features a naked woman holding a mirror that displays her bare midsection going in the opposite direction. The painting hasn’t been displayed publicly for 25 years, and Mr. Di Donna’s enthusiasm for it is obvious.

“There’s a shyness and exposure at the same time,” he said, of the almost obscured nudity. “I think this really exemplifies what the best Magrittes are about.”