Just before dawn on Oct. 14, Salon reporter Justin Elliott was on Twitter and in Zuccotti Park, awaiting the outcome of Mayor Bloomberg’s proposal to clear out the Occupy Wall Street protestors for cleaning.

“Getting cold and tired, but every serious protestor has a tarp to block the wind. And I refuse to huddle for warmth #gonnadie,” Ms. Maslin Nir tweeted just before 1 a.m. on Oct. 17.

With freezing rain forecast for Saturday, staying warm is a major concern for Occupy Wall Street protesters and reporters alike. For many journalists, the movement is noteworthy for regularly drawing them out of the newsroom for long periods of time, demanding an on-the-fly mélange of traditional and social media reporting.

Unlike, say, a political campaign—which can be adequately covered over the phone from the cozy dryness of the office—the demonstrations require hands-on reporting, Mr. Elliott explained.

“Because it’s so de-centralized, I think there’s a real advantage to being on the marches and in the park as much as possible,” he said.

For the same reason, OWS reporters keep one eye on Twitter, one of the main organization tools of the protest, at all times.

“You can’t be omnipresent,” said ANIMAL New York editor Bucky Turco. “So If I’m at Zuccotti and there’s something going on elsewhere in the city, it will usually end up on Twitter first and I can adjust.”

In New York, protesters and demonstrators typically coordinate with police before marches and acts of civil disobedience, explained Mr. Turco. (He had the procedure explained to him by Detective Rick Lee, the so-called “hipster cop.”)

“That’s what kind of makes it intriguing for the media, is that you don’t know what’s going to happen next,” Mr. Turco said. “It’s organic and it’s not staged.”

With the help of a MiFi, Mr. Turco and other reporters blog, write and file copy directly from the scene or a hospitable fast food restaurant nearby.

“Sometimes I just do my normal routine from Zuccotti,” Mr. Turco said.

As populist uprisings in Iran and Egypt demonstrated, Twitter is more than a reporting tool. Professional reporters, like citizen journalists, treat it as a publishing platform for a complementary narrative, more personal than a newspaper story and delivered in real time.

“A lot of the stuff that’s being put out on social networks is kind of a blow by blow, giving a glimpse into the mechanics of things like the General Assembly,” said Anthony De Rosa, Reuters social media editor.

“Social media is also a great mechanism for reporting details and anecdotes that may not fit or work in a traditional article. So is live coverage and live blogging,” Ms. Mullany said in an email to the Observer.

A live tweet can illustrate the excitement and urgency that hooks a reader.

“Tweeting scratches that itch for the reader,” Ms. Maslin Nir said. “Especially when police are about to close in and you’re getting these tweets like, ‘We’re being shoved down 42nd Street, the barricade is crushing us.’ You know, that’s really something that Twitter can do.”

But for others, covering OWS exemplifies one of the major tensions between new and old media. Swept up in the shallow stream of Twitter, do reporters miss the big picture?

“There’s a lot of people tweeting about Occupy Wall Street, but there’s actually very few people, if you start looking around, just on the scene, doing descriptive reportorial stuff,” Mr. Elliott said. He tends to live tweet when he’s on scene, and Salon posts both traditionally reported stories and live tweet feeds for readers.

Although Twitter tells reporters where to be and when, it’s little help once the tape recorder comes out.

“Because there are no leaders in the group, it’s difficult to get a really representative statement on what’s going on,” said a reporter of a widely circulated New York newspaper who was gathering information at an OWS gathering on Oct. 26 in Union Square.

“It ends up being a lot of talking, to a lot of different people, and then, somehow, trying to find the truth between everything that you’re told,” added the reporter, who asked to remain anonymous for job security purposes.

The reporter’s struggles raise an interesting question: Is the plurality of Twitter a more accurate representation of the movement itself than the forced, newspaper-friendly narrative?

Most news outlets are hedging their bet, combining new and old, in hopes of creating the most complete portrait of the movement possible, at the risk of their reporter’s social lives.

“You have to devote a lot of time to it,” Mr. Turco said. “I haven’t seen my family and friends as much.” 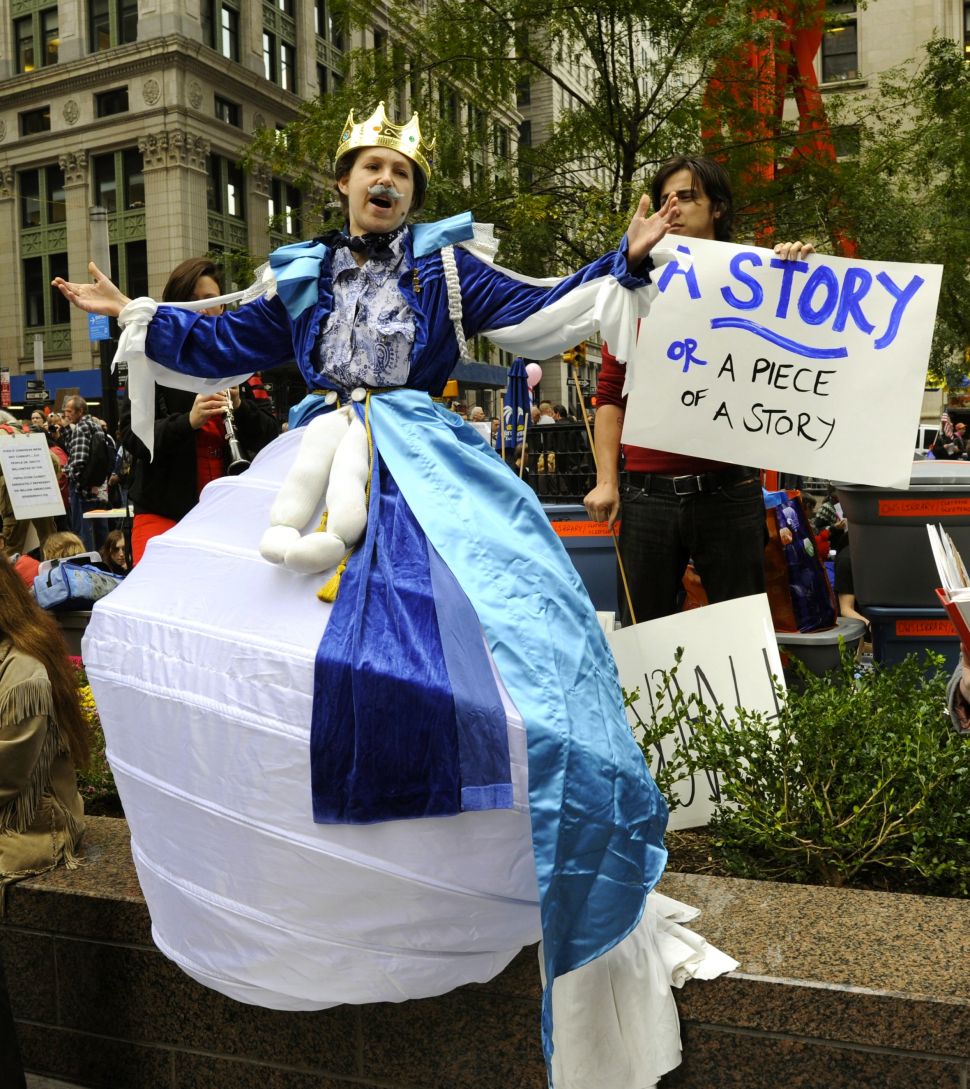