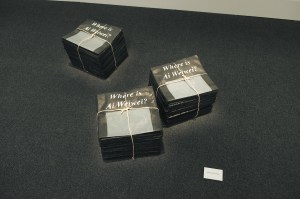 Last week The Observer dropped by the opening of the Museum of Modern Art exhibition of murals created by radical Mexican painter Diego Rivera 80 years ago for his first monographic show at MoMA. And it was crazy. Were the murals rife with searing political images of revolution and the oppression of the agrarian and working classes? Probably. But we wouldn’t know, because the event was so mobbed that guards were barricading the stairs, bouncing back those hordes of art-world denizens drunkenly attempting to stampede the show.

What we did get to see, before fleeing the premises, was a Mexican beauty queen, teetering through the crowd, draped in a sash bearing the name of the bank sponsoring the exhibition, BBVA Bancomer, the largest financial institution in Mexico, which controls some 20 percent of the market (and was founded in 1932, just one year after Rivera painted his MoMA murals).

What does all this say about Art and Politics Today? That the art world is desperate for a latter-day Rivera, that it thirsts for a Next Great Artist who shares Rivera’s radical vision? Or that the art world suffers from a chronic and acute herd complex, and will as soon follow the glittering train of a bank-sponsored beauty queen back to the bar as it will shuffle through a politically powerful exhibition? For answers to such profound questions, we must turn to reality television, to those scholarly arbiters of the state of contemporary art at Bravo’s Work of Art: The Next Great Artist.

SUMMARY: This week, the gang of potentially great artists was shuttled off to Queens in an unmarked van. No, artist mentor/auctioneer Simon de Pury was not taking the contestants to his outer-borough torture lair. Instead, they were heading out on a field trip to the factory space in which the New York edition of The New York Times is printed by robots. There, they were dealt the task of making artworks inspired by Times headlines and told to incorporate physical newsprint into their final pieces. The victor of the “Ripped From the Headlines” contest would receive $20,000 from the shadowy folks at the ever-mysterious Blue Canvas magazine, and would have their work displayed in the midtown headquarters of The Times.

Topics tentatively addressed over the course of the episode included Libyan rebel weaponry, the abysmal state of the U.S. economy, the Japanese tsunami and the BP oil spill. But contestant Young Sun Han won for his stacks of blackened newspapers, which tackled the disappearance of dissident artist Ai Weiwei, who at the time of filming was still being detained without explanation by the Chinese government.

Bayeté Ross Smith, meanwhile, was booted off for a shoddily constructed sculpture inspired by a review of the musical Sister Act, a sculpture that featured two gilded doors emblazoned with the headline “Different Church, More Sequins” in silver lettering, and not a single sequin.

LESSON: “The interesting thing about art is that sometimes the whackness of it can make people really intrigued,” Mr. Smith declared on the latest episode of the show. “Like it’s so awful they’re just like, ‘It’s so bad, is it good?’” When asked after the show what exactly about his losing sculpture he thought hadn’t worked, however, he replied, “It just wasn’t good”—an insurmountable failing in any work, and particularly in one that tries to grapple with such complex issues as, in Mr. Smith’s own words, “how religion has evolved as this voice of certain types of people and how there’s always been a spectacle associated with it that we’re always conscious of but we don’t necessarily acknowledge.”