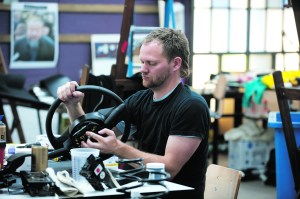 Oh, O.K., fine, if you insist on twisting The Observer’s arm, we’ll admit it: sometimes the shtick of this column—which posits that one can learn absolutely all there is to know about the state of contemporary art today by watching an art-themed reality television show—is flawed.

Yes, on rare and shocking occasions, the gray-bearded academics at Bravo’s Work of Art: The Next Great Artist miss the mark in their sage sorties into the wilds of art today. For instance, not all “jewelry designing” socialites are as qualified as show-host/judge China Chow to anoint the next great artist with a tap of their bedazzled swords. Nor can all artists be separated from Al Pacino and/or lethal jet-skiing accidents by fewer than six degrees. Moreover, it is certain that not all art critics hate Star Wars as much as New York magazine’s Jerry Saltz.

So Work of Art is not a perfect microcosm. But the show retains moments of incredible insight into the machinations of the current art scene, served up by Bravo’s tenured professors. For instance, in the case of the latest episode, Mr. Saltz, Ms. Chow, their fellow judges and young competitors provided a lucid look at street art’s present dual status: as naughty, lawbreaking stepchild and radiant, bajillions-of-dollars-earning firstborn.

WEEK SIX: In which we learn that these days street art is mostly made over the course of many daytime hours, in full view of joggers and the police.

SUMMARY: Our remaining contestants were broken up into pairs and told to emblazon blank brick walls with “street art.” Because they were in Brooklyn—that outer borough to which, apparently, the longish arm of the law has not yet reached—the non-law-abiding artists did not bother to go incognito. The judges, meanwhile, changed into their plebeian clothes, which for Mr. Saltz and artist-mentor/auctioneer Simon de Pury entailed being swaddled in swaths of denim, and left China Chow alternately dressed like a marshmallow and a Muppet.

The artist teams then very noncovertly covered their walls with self-portraits that addressed fatherhood, delicate depictions of Iranian-American-Philippine-Canadian tree/humans being uprooted by bureaucratic aliens, many-penised tigers cavorting, and vacant Pac Man mazes. Actual street artist Lee Quinones showed up looking nervous as cop cars cruised by in broad daylight, and proceeded to assist the judging panel, which crowned Dusty Mitchell and Young Sun Han victors for their daddy-issue-packed self-portraits. The duo received $30,000 from Bluecanvas magazine (the moniker of Ms. Chow’s offshore trust-fund trove?). The Sucklord, meanwhile, was booted off the program for his contribution to the lackluster black-and-white maze painting.