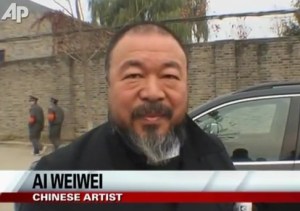 The AP recently released a video feature on the tax woes of Ai Weiwei that features the artist in all his sardonically upbeat glory.

“It’s more or less like I was a hostage a half year ago, and now I’m paying the ransom,” he says in the video. “I feel I’m being robbed.”

Earlier this year Mr. Ai was released from prison after a three-month abduction, and then slapped with a bill for $2.4 million, allegedly for tax evasion. In this video we learn that he has placed down a deposit of $1.5 million toward the bill, though he will continue to dispute the sum.