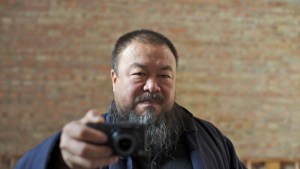 Well, we’ve defined much lesser things as performance in the past–from a brief stint on General Hospital to a dress made of raw meat–so why not Mr. Ai’s legal struggles? He’s made the inner workings of the Chinese government more transparent, and the donations of people around the world to help Mr. Ai pay the dubious tax bill, which included some supporters literally throwing money into the artist’s yard, was more profound than a lot of works you’d see in a museum.

The article, which you should read, does contain this bit of ominous detail:

“The possibility of being taken away by police again is always on the artist’s mind.

‘I worry about my child, my mother and people around me, people who care,’ [Mr. Ai] said. ‘But at the same time, if I don’t make this an argument, the kind of terrible things, the dangerous conditions will remain there and can happen to anybody. I cannot bear this kind of responsibility.'”

Mr. Ai’s life may have become a kind of performance piece, but (even if the line separating the two is thin) it is still a life.