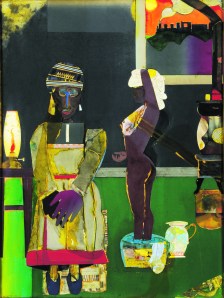 It is fitting that Romare Bearden is best known for his work in collage; the omnivorous artist wrote hit jazz songs, painted, drew, and made tapestries, quilts, book jackets, and album and magazine covers. It is difficult to reduce his penchant for quoting Paul Valéry and his close friendship with Hanna Arendt, his stint as a baseball player and his study under Georg Grosz to the label “black artist,” unless, as Bearden himself did, you see blackness as a part of the American identity—an identity that has always been a pastiche.

During his lifetime—he passed away in 1988—Bearden became one of America’s most likable and popular artists and had retrospectives at the Museum of Modern Art and the National Gallery, but the Studio Museum in Harlem is claiming him as their own and celebrating what would have been his 100th birthday with “The Bearden Project,” a show whose latent thesis is the connection between the Harlem Renaissance and certain of today’s artists.

Bearden’s blackness was always second to his Americanness, and for him art was a universal language—he spoke of synthesizing his native Harlem, in N.Y.C., and the Haarlem of Dutch masters like Vermeer. He was a citizen-artist, organizing exhibitions, starting a gallery to promote minority artists, and working for the department of Social Welfare (he didn’t believe in artists teaching). He was born in North Carolina, but his mother—a political activist and newspaper editor in Harlem—raised him in New York, where he found early success and enjoyed a long career.

The Studio Museum, on whose advisory board Bearden once sat, along with his peer the artist Jacob Lawrence, asked contemporary artists to submit a work to commemorate Bearden’s influence, and the results are a grab-bag ranging from the imitative to the exceptional. The best of them meditate on the state of contemporary art, the problem of influence and the medium of collage.

Hung salon style, the exhibition resembles a mini art fair. There are new works by plenty of current gallery stars, including Rashid Johnson, Lorna Simpson, Wangechi Mutu, Mickalene Thomas, Julie Mehretu, Glenn Ligon, Kori Newkirk and Xaviera Simmons, but there are also dozens of pieces from relatively unknown artists. Apparently chosen by the artists, rather than a curator, the works produce a simultaneous sense of jumbled disorganization and democratic juxtaposition. As the show’s curator, Lauren Haynes, is surely aware, this egalitarian premise suits a Bearden tribute; in the 1960s, Bearden used his own Cinque Gallery to promote young talent, organizing omnivorous exhibitions like 1966’s “The Evolution of Afro-American Artists: 1800-1950.”

Two works by Bearden, Two Women (1969) and Conjur Woman (1964), stand in for the 300-some collages he made over the course of his career; assembled of cut cloth and paper as well as photo montage, they contain the angled lines and graphic forms, the scale shifts and surrealist juxtapositions that exemplified his style. Though Bearden’s oeuvre is rich with the repeated motifs of trains, birds and shamanistic women, he tended to stick to a palette of reds and greens, and black and white. His two pieces here, which reference African sculpture, Surrealism, Pop Art and Picasso, look as contemporary as anything made in 2011: they propose collage as a democratic mix of high and low culture, the documentary and the abstract.

And yet, the best contemporary offerings in this show sidestep obvious connections to Bearden. Xaviera Simmons’s color photo diptych, Gold (2011), is composed of self-portraits in which the artist obscures her face from view with record album covers showing Malcolm X and Nina Simone. The phrase “To be young, gifted, and black” gets directly to the contemporary legacy of the Civil Rights movement in a manner that doesn’t mimic Bearden, but is instead powerful in its plainness.

Also impressive is Meleko Mokgosi’s Big Boy (2011), a large and political tableau of colonial surveillance that transforms photographic source material into a large-scale gray print with the photographic immediacy of documentary and the narrative potential of a story. Mickalene Thomas’s Photomontage 12 (2011) is four black-and-white photographs of a woman posing as though for pinup photos for a long-distance boyfriend. They strike a pitch-perfect note that blends nostalgia, black power, sensuality and longing.